In a virtual world, are we losing our sense of touch? 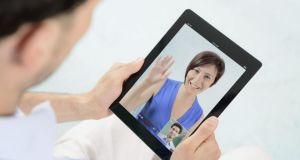 ‘Are we perhaps entering an age of “excarnation,” where we obsess about the body in increasingly disembodied ways? For if incarnation is the image become flesh, excarnation is flesh become image. Incarnation invests flesh; excarnation divests it.’ Photograph: Getty Images

Are we losing our senses? In our increasingly virtual world, are we losing touch with the sense of touch itself? And if so, so what?

I recently had occasion to pose these questions to students in a college class I teach on eros – “From Plato to today.”

Not surprisingly, the topic of physical contact and sex came up, and the conversation turned very much to “today”. A number of the students said that they regularly messaged online before having “real contact” with partners, perhaps using online dating and mating services like Match.com, OkCupid, SpeedDate.com and Tinder.

They shared messaging acronyms that signalled their level of willingness to have sex, and under what conditions. They admitted to enjoying the relative anonymity of the one-off “hook up,” whose consummation required no preliminar close-quarters courtship rites or flirtation ceremonies, no culinary seduction, no caress, nothing – apart from the eventual “blind rut,” as James Joyce put it – requiring the presence of a functioning, sensitive body.

We noted the rather obvious paradox: The ostensible immediacy of sexual contact was in fact mediated digitally. And it was also noted that what is often thought of as a “materialist” culture was arguably the most “immaterialist” culture imaginable – vicarious, by proxy, and often voyeuristic.

Is today’s virtual dater and mater something like an updated version of Plato’s Gyges, who could see everything at a distance but was touched by nothing? Are we perhaps entering an age of “excarnation,” where we obsess about the body in increasingly disembodied ways? For if incarnation is the image become flesh, excarnation is flesh become image. Incarnation invests flesh; excarnation divests it.

In perhaps the first great works of human psychology, the De Anima, Aristotle pronounced touch the most universal of the senses. Even when we are asleep we are susceptible to changes in temperature and noise. Our bodies are always “on.” And touch is the most intelligent sense, Aristotle explained, because it is the most sensitive. When we touch someone or something we are exposed to what we touch. We are responsive to others because we are constantly in touch with them.

“Touch knows differences,” Aristotle insisted. It is the source of our most basic power to discriminate. The thin-skinned person is sensitive and intelligent; the thick-skinned, coarse and ignorant. Think of Odysseus and the Cyclops, Jacob and Esau. The power of touch. Even the Buddha, when challenged by Mara to reveal his authority, simply touches the ground. Our first intelligence is sensory refinement. And this primal sensibility is also what places us at risk in the world, exposing us to adventure and discovery.

Tactility is not blind immediacy – not merely sensorial but cognitive, too. Savoring is wisdom; in Latin, wisdom is “sapientia”, from “sapere,” to taste. These carnal senses make us human by keeping us in touch with things, by responding to people’s pain – as when the disguised Odysseus (whose name can be translated as “bearer of pain,”), returning to Ithaca, is recognised by his nursemaid, Eurycleia, at the touch of his childhood scar.

But Aristotle did not win this battle of ideas. The Platonists prevailed and the Western universe became a system governed by “the soul’s eye.” Sight came to dominate the hierarchy of the senses, and was quickly deemed the appropriate ally of theoretical ideas.

Western philosophy thus sprang from a dualism between the intellectual senses, crowned by sight, and the lower “animal” senses, stigmatised by touch. And Western theology – though heralding the Christian message of Incarnation (“word made flesh”) – all too often confirmed the injurious dichotomy with its anti-carnal doctrines; prompting Nietzsche’s verdict that Christianity was “Platonism for the people” and “gave Eros poison to drink.” Thus opto-centrism prevailed for over 2,000 years, culminating in our contemporary culture of digital simulation and spectacle. The eye continues to rule in what Roland Barthes once called our “civilisation of the image.” The world is no longer our oyster, but our screen.

For all the fascination with bodies, our current technology is arguably exacerbating our carnal alienation. While offering us enormous freedoms of fantasy and encounter, digital eros may also be removing us further from the flesh.

Pornography, for example, is now an industry worth tens of billions of dollars worldwide. Seen by some as a progressive sign of post-60s sexual liberation, pornography is, paradoxically, a twin of Puritanism. Both display an alienation from flesh – one replacing it with the virtuous, the other with the virtual. Each is out of touch with the body.

This movement toward privatisation and virtuality is explored in Spike Jonze’s recent movie “Her,” where a man falls in love with his operating system, which names itself Samantha. He can think of nothing else and becomes insanely jealous when he discovers that his virtual lover, Samantha, is also flirting with thousands of other subscribers.

Eventually, Samantha feels so bad for him that she decides to supplement her digital persona with a real body by sending a surrogate lover. But the plan fails – while the man touches the embodied lover he hears the virtual signals of Samantha in his ears and cannot bridge the gap. The split between digital absence and carnal presence is unbearable. Something is missing: love in the flesh.

The move toward excarnation is apparent in what is becoming more and more a fleshless society. In medicine, “bedside manner” and hand on pulse has ceded to the anonymous technologies of imaging in diagnosis and treatment. In war, hand-to-hand combat has been replaced by “targeted killing” via remote-controlled drones. If contemporary warfare renders us invulnerable to those who cannot touch us, can we make peace without a hand to shake? (Think of Mandela-de Klerk or Begin-Sadat).

Full humanity requires the ability to sense and be sensed in turn: the power, as Shakespeare said, to “feel what wretches feel” – or, one might also add, what artists, cooks, musicians and lovers feel. We need to find our way in a tactile world again. We need to return from head to foot, from brain to fingertip, from iCloud to earth. To close the distance, so that eros is more about proximity than proxy. So that soul becomes flesh, where it belongs. Such a move, I submit, would radically alter our “sense” of sex in our digital civilisation. It would enhance the role of empathy, vulnerability and sensitivity in the art of carnal love, and ideally, in all of human relations. Because to love or be loved truly is to be able to say, “I have been touched.”

Richard Kearney is a philosophy professor at Boston College. His books include The Wake of Imagination and the forthcoming Carnal Hermeneutics. This article first appeared in the New York Times