What do participants say about the project? 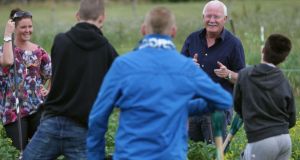 Usain O’Connor
I tell the children they can choose their own pseudonyms, as I won’t be using their real names, and suggest they might like to choose someone they admire. That is how we end up with Usain O’Connor. How would he describe himself? “I’m a mad fisherman, and I fish every day of the week. Eel, pike, perch, trout, roach, carp. My father taught me. I’m here because I got suspended from school for messing and fighting. This is my second year here. I’ll be 16 in eight months’ time.”

Usain says at school he was called names. What kind of names? “Innocent,” he replies flatly. “Handicapped. School has always been difficult since the start.”

He was accommodated by the school in a reduced-hours programme. So what happened then? “They brought me into the project. Bit of help. It’s good.” Usain was brought to the project because of his stealing, his poor school attendance and his classroom behaviour. It wasn’t an unwelcome development . “My family were happy about it. I’m the eldest. There’s seven and myself.”

Usain has now sat his Junior Certificate. With other boys from Ballinasloe Junction Project, in Co Galway, he has been given a place to study for his Leaving Cert with Youthreach, another State-funded programme for children with educational challenges.

Mac
Mac is 14 years old but looks a lot younger. He likes soccer and says he plays in midfield. Might he be a soccer player when he is older? “Never,” says Mac. He is not an optimist.

Mac is now the youngest of five. His younger brother died. I get confused about this and call him the second youngest. I apologise. “You’re all right,” says Mac courteously.

When I ask why he is participating in the Project, Mac is pretty clear. Like Usain, he’s on a reduced-hours programme at school. “I get out at 12.30pm. I hit the teacher’s son.” Mac’s view of school is bleak. “ It’s not really great. I don’t do any work. School is boring to me. It’s good for other people. Better people like it. Better people than me.”

Mac likes work, he says. He enjoys building and would like to be a carpenter. His mother works in a nearby clothes shop. “She cleans rooms,” he says. His father goes hunting “rabbits and things”.

The Ballinasloe project is good, he says. “It’s pure different. It brings you out cycling. We went to Croagh Patrick. Before, I’d watch television. Play a game. Wait for my friends. It wasn’t great.”

Matthew
Matthew is a young man of 19, sober and industrious. He has come to the Junction Project office after finishing work, because he wants to praise what it did for him when he was a young teenager.“It’s very good for keeping you on track. Only for here I wouldn’t have finished school. I went to level 5 in Fetac” – the Further Education and Training Awards: there are 10 levels– “in Galway and did carpentry. They constantly encourage you about things here. I was finding school very hard. When I came here I did the Junior Cert.

“The youth workers here were concentrating on the pupils; the classes were smaller.When I said I’d have no thoughts of doing something, they’d say, ‘Just try it once. See what you think.’ So that’s what happened. I just got loads of encouragement.

“I’m in Canal House,” he says, referring to a training centre that also helps people who have come through the probation system. “I’m in the further-learning section at the moment. I go there every week, Monday to Friday. I get €164 a week. If it wasn’t for this place I’d probably be in the probation part of Canal House, but instead I’m in the further-learning part. I have friends in trouble. Up in court for robbing, all that kind of stuff. Drinking. Drunk and disorderly.”

Matthew’s experience of school was grim. He saw a difference in the way Traveller children were treated. “Well, some of the teachers wouldn’t work as much with you as maybe with the other kids. I would say to people that this scheme is worth the money. It’s cheaper than locking people up. ”

Valerie
This girl chooses her pseudonym partly because “it’s nice and normal”. Valerie’s history is perhaps the most extreme of the children I talk to, yet she seems the gentlest of girls. Her relationship with her youth worker, Edel Kelly, who runs Ballinasloe Junction Project, is also the closest. “She is like a second mother to me,” says Valerie. Would she like to have children of her own one day? “No. Not after what I’ve seen. No.”

In her early teenage years she was “robbing, doing drugs and cannabis”. In her final year of primary school her father, to whom she was very close, died. Valerie’s extreme behaviour continued until she came up against the Garda. “They brought me to the station. I was shoplifting. I was robbing houses. I got a two-year probation.”

Her criminal behaviour, she says, was an effort to please her peers.”If I wasn’t part of that group then I had no friends. I didn’t feel part of the group unless I did it.” But her criminal behaviour did not relieve her feelings, and when she was 16 she started “to get suicidal and harm” herself.

“I hated school, and I dropped out of it. They just saw me as a bad person, as a thing. In here it’s not like that. Paul and Edel, they don’t let anybody go. It’s the only place that gives you a second chance.”

To Valerie the Ballinasloe project was a lifeline. “Edel is the second-best thing that happened to me, after my mother. Edel would ring me at night. She used to bring me places, on outings and things like that. I wouldn’t be alive without her, and my mother.”

Valerie’s mother, overwhelmed by her circumstances, is being treated for a mental-health condition. Valerie’s half-brother and half-sister, who are five and three, are in foster care. But things have got steadily better for her, and she is now training at Canal House in Ballinasloe, which she enjoys. “I’d love to do youth work. I’d like to try and help other young people.”

She also has a boyfriend. “He doesn’t drink, and since I started going round with him I don’t drink either. He feels I should have got a better life growing up. And I’m glad he feels that way.”