Landlord rejection of rent allowance a ‘form of apartheid’ towards unemployed, says O’Dea 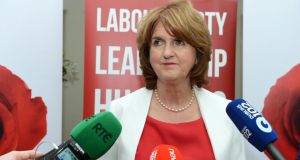 Minister for Social Protection Joan Burton says a new housing initiative is being introduced to ensure families at risk of losing private rented accommodation will have “more timely and appropriate” interventions made on their behalf. Photograph: Eric Luke/The Irish Times

A new housing initiative is being brought in to ensure families at risk of losing private rented accommodation will have “more timely and appropriate” interventions made on their behalf, according to Minister for Social Protection Joan Burton.

Speaking at a parliamentary questions session in the last night Dáil, Ms Burton said the Department of Social Protection was working with the Dublin Region Homeless Executive to introduce the new initiative, which she expects to launch “towards the middle of this month”.

She added a new rent limit review had begun which aimed to “increase supply generally” and would “feed into” the upcoming budget.

“I am concerned that raising rent limits as such is not the solution to the problem,” said Ms Burton. “It is likely to add to further rental inflation and impact not only on rent supplement recipients but also on many lower income workers and students who are paying their rents out of their private resources.”

Ms Burton said the Government had already provided over €344 million in rent supplement support since the start of 2014, adding that maximum rent limits were reviewed every 18 months, with the latest revised rent limits introduced in June 2013.

“I am fully aware that in some areas, particularly urban areas, prospective tenants, including those seeking access to rent supplement, are finding it increasingly difficult to secure accommodation owing to reduced availability,” said Ms Burton.

“We have made arrangements to allow customers of the scheme who are facing difficulties to bring their situation to the attention of staff in the Department’s community welfare service, CWS, who have considerable experience in dealing with customers and will continue to make every effort to ensure their accommodation needs are met.”

She added that CWS staff could use “discretionary powers” to award rent supplements in “exceptional cases”.

The Minister said the CWS would work closely with local authorities and stakeholders to ensure people were diverted away from homeless services and towards community-based supports.

Speaking in the Dáil, Fianna Fáil TD Willie O’Dea raised the issue of landlords specifying on housing sites that they would not accept rent allowance, calling it a “form of apartheid” towards unemployed people in need of housing.

“The practice of landlords of indicating through websites that rent allowance is not acceptable is not helpful,” responded Ms Burton. “I do not like to see such a blanket exclusion, but agencies want to know if a landlord is interested in somebody who may be in receipt of rent supplement.”

Ms Burton’s comments follow the release of the Implementation Plan on the State’s Response to Homelessness to December 2016 which was approved by the Cabinet in May. The 83-page plan sets out what the Government must do to achieve its objective of ending long-term homelessness by 2016.

Minister of State for Housing Jan O’Sullivan said in May that €35 million would be available to bring vacant units up to living standard for homeless people. She also announced a further €25 million in funding for capital projects.

However, according to Bob Jordan, chief executive of Threshold, the plan does not provide for the “overhaul” of the rent supplement scheme or the “introduction of any form of rent control”.

“There are people falling into homelessness every day now because they can’t find - or can’t afford to keep - homes within existing Rent Supplement limits,” said Mr Jordan.

The focus of the plan is exclusively on the homeless population, estimated at about 2,700 people. Among these are more than 200 homeless families with children across the State - about 180 of them in Dublin accommodated in hotels.