Homeless man tells Leo Varadkar about life on €7 a day

‘Homelessness one of the loneliest places,’ man tells Minister at pre-budget forum 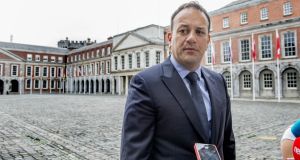 A young man who said he was living on €7 a day was among those who questioned Minister for Social Protection Leo Varadkar at a pre-budget forum in Dublin yesterday.

The forum, attended by 40 non-governmental organisations, was hosted by Mr Varadkar and his colleague, Minister of State for disabilities, Finian McGrath.

From Dublin, the man said he was not attending with any organisation but was representing himself.

He was under 25, unemployed and homeless.

“Homelessness is one of the loneliest places you can be,” he told the Minister. “You’re walking the streets all day and you’re on a €100 payment. For me personally, I pay €15 a week in [child] maintenance, €35 to my homeless accommodation and I’m left with €50 a week. That’s €7 a day to feed myself, educate myself and keep myself.

Mr Varadkar said the issue of the reduced rate of jobseeker’s allowance for under-26s was one that came up a lot.

Alison O’Reilly from the National Association of Widows in Ireland said it was vital that the telephone allowance be restored.

She also called for an increase in the living alone allowance, worth €9 a week.

“A lot of our members are living in very isolated rural areas. The phone is absolutely vital. It is not a luxury. If you have a personal alarm it will not work on a mobile. You have got to have a landline,” she said.

Mr Varadkar said there were tough choices to be made.

He said increasing the living alone allowance by €2 per week would cost €20 million a year.

“At the same time we figure we could provide free primary school books to all primary children for the same amount. They’re the kind of decisions and choices that have to be made.”

Restoring the telephone allowance in full would cost €100 million a year, he said, which would be a very large “single item”.