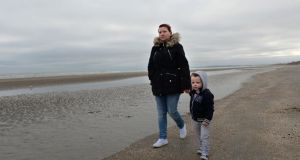 Tara Tevlin and her son Leon (2) from Duleek, Co Meath, who have been homeless since April 2014. Photograph: Dara Mac Dónaill

The homelessness crisis in Dublin appears to be spilling into areas around the capital.

Charities and public representatives have warned that county council rent caps in Wicklow, Meath and Kildare are “causing homelessness” as rents there are now often on a par with Dublin rents.

However, while an infrastructure, albeit an overstretched one, exists in Dublin to serve the homeless, local authorities in surrounding areas are struggling to cope.

Kildare County Council now has 100 families with children on its homelessness list – a figure which has grown in the past year, said a spokeswoman. A spokesperson for Wicklow County Council said: “Since early 2014 we have experienced a large volume of families presenting as homeless.”

“The caps are quite simply causing homelessness,” said Mr Tobin. “I have dozens of families coming to my constituency office every week facing homelessness or already out of their homes and couch-surfing, staying in overcrowded conditions with family or friends or sleeping in their cars.”

The Simon Communities, Focus Ireland and Threshold all say the rent caps are inadequate. In Bray, for example, says a spokeswoman for Simon, a family with two children is entitled to pay €925 per month. “The average rent demanded for a two- or three-bedroom house in Bray is anywhere between €1,200 and €1,900 a month. It is impossible for families to maintain tenancies.”

Fionnughla McLoughlin, manager of the Tenancy Protection Service which advocates for families at risk of homelessness in Dublin and Cork, says it is now getting a steady number of calls from families in the commuter belt counties.

The service has no protocol in place with the department to advocate for families outside Dublin or Cork, though Ms McLoughlin is confident, if it had, it would be in high demand.