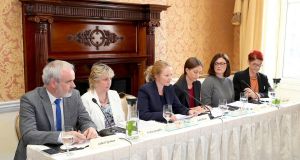 The Government must urgently commit to “substantial legislative and constitutional change” in response to a UN finding that the State should amend the law on voluntary termination of pregnancy, a number of groups have urged.

Experts on the UN Human Rights Committee found that an Irish woman carrying a foetus with a fatal abnormality was subjected to cruel, inhuman and degrading treatment due to the ban on abortion here.

The committee said Amanda Mellet had been forced in 2011 to choose between carrying her baby to term, knowing it would not survive, or travelling abroad for a termination.

Several organisations welcomed the findings and urged the Government to immediately commit to an amendment on the repeal of the Eighth Amendment to the Constitution, which gives effect to the State’s abortion ban.

The findings were, however, rejected by the Pro Life Campaign, which said Ireland was perfectly entitled to determine its own laws in this area and that the committee was “100 per cent partisan in favour of abortion”.

Minister for Education Richard Bruton said on Thursday he could not say what action the Government would take in response to the committee’s findings.

Speaking in the Dáil, he said a change would require a constitutional amendment. In the programme for government, there was a commitment to set up a citizens’ assembly within six months to consider all the issues involved.

“For the first time ever, a UN treaty body has found that the illegality of abortion is, in itself, a human rights violation,” Mr O’Gorman said.

Mr O’Gorman said the Government must accept the Human Rights Committee’s decision and commit to urgently redressing the harm experienced by Ms Mellet. It must also ensure that no woman was ever forced to go through a similar ordeal.

“Ireland’s constitution cannot be used as an excuse. The Eighth Amendment must be repealed.”

Executive director of the Irish Council for Civil Liberties Mark Kelly said the latest UN opinion had no direct legal effect in the State.

“However, it joins a chorus of expert voices reminding Ireland that its abortion regime is wildly out of kilter with abortion law and practice in the family of civilised nations.”

Ailbhe Smyth, convenor of the Coalition to Repeal the Eighth Amendment, said “substantial legislative and constitutional change” was now required for the State to become compliant with its international human rights obligations.

“The first step in delivering that is a referendum to repeal the Eighth Amendment. It is absolutely unacceptable for government to hide behind a constitutional amendment which the public in a very considerable majority does not now support.”

Niamh Allen of the National Women’s Council of Ireland said the ruling vindicated the rights of all women in the State, whose rights had been “gravely undermined by the restrictive abortion regime for far too long and at great cost to the health and wellbeing of our female population”.

Ms Allen called on the Government to act promptly and to set out a “very clear roadmap” to repeal the 8th amendment and to legislate for free, legal and safe abortion.

Gerry Edwards of Termination for Medical Reasons, said: “We are very proud of Amanda, who has shown incredible bravery and selflessness in going public and taking her case to the UN Human Rights Committee to hold Ireland accountable for its punitive laws and ensure that women are no longer denied the ability to end their pregnancies in Ireland.”

Catholic Primate of All Ireland Eamon Martin said he had some difficulty with outside bodies telling Ireland what to do on abortion law.

The Archbishop of Armagh said it was a choice for Irish people and that the right to life trumped all other rights, including the right to choose.

The Pro Life Campaign said the findings were “further proof that the committee is 100 per cent partisan in favour of abortion and never takes account of the hugely damaging effects of abortion on both mother and baby”.

Cora Sherlock of the organisation said the UN’s Human Rights Committee had “become a de facto lobby group for abortion”.

Tracy Harkin of the group Every Life Counts said the UN had “deliberately ignored the experiences of families who had received great joy and love from carrying their babies to term” and that those babies “deserved equal protection and love”.