Government ‘in denial’ over reality of racism in Ireland 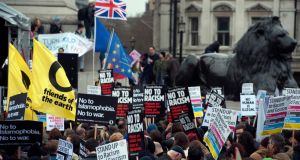 Protesters during the Stand Up to Racism and Fascism national demonstration in Trafalgar Square, London on Saturday. Photograph: PA

The Irish State remains in denial about racism, a rally in Dublin to mark UN international day against racism on Saturday was told.

The United Nations designated March 21st a global day against racism in 1966 and marches and rallies were held across the world to commemorate the victims of the Sharpeville massacre in 1960, when 69 peaceful protestors against apartheid were killed by South African police.

Shane O’Curry, chair of the European Network Against Racism, Ireland, told around 150 people at the event outside the Central Bank, racism was a daily fact of life for all ethnic minorities in Ireland.

He cited the experiences of abuse against Travellers, Roma, Asian people, Muslims, black Africans and undocumented migrants, recorded by ENAR Ireland, as evidence of this.

In a report published on Friday ENAR Ireland found black people were the most likely to suffer racist abuse here, followed by people identified as Asian or Asian-Chinese.

“And yet the State is in an official state of denial about this,” said Mr O’Curry. “There are no CSO figures on racism to speak of.

“There are no measures for redressing racism to speak of. The 1989 Incitement to Racial Hatred Act is the only piece of legislation that names racism and yet it’s completely inadequate.”

He said there had been no action plan against racism since 2008 and there were no hate-crime provisions.

He called on the Government to bring forward an action plan against racism to address institutional racism and to take a “root and branch look at racism and its causes and the reasons why people are divided against each other”.

Among the steps the Government could take, he suggested, would be to recognise Travellers as an ethnic minority and to end the accommodation of asylum seekers in direct provision centres.

Dublin City People Before Profit councillor, Bríd Smith, said racism was a feature of societies that were divided against each other by those in authority.

Maureen Ward, vice chairwoman of the Irish Traveller Movement called for the Irish state to recognise Travellers as an ethnic minority, saying it would enable a “shared pride and shared identity” which was essential “for any community seeking to take its rightful place in wider society”

“So on behalf of Irish Travellers I call on the Irish Government to let us have an Ireland where we as Irish Travellers are proud of our identity and have our ethnicity recognised so we can achieve our fullest potential and play an active role in Irish society.”

Edmond Lukusa, Sinn Féin councillor in Fingal, described the area he represented in Mulhuddart as one of the most ethnically rich and diverse in the State. A tenants’ group had been established to counter racism and among its activities was to record incidents of racist abuse.

Echoing Mr O’Curry, he said there was a “lack of real data” on racist attacks.

“Neither the gardaí nor Fingal County council collect such data. Nor do they have any policy or procedures in place to allow a true picture of racism to emerge. This must be challenged.”