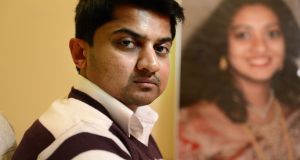 Praveen Halappanavar with a portrait of his wife Savita who died from septicaemia at Galway University Hospital on October 28th, 2012. File photograph: Cyril Byrne/The Irish Times

Neither Savita Halappanavar’s widower, Praveen, nor her parents were in court yesterday to hear the last brief legal discussion of her death.

The family’s solicitor, Gerry O’Donnell, made no statement afterwards, honouring the wishes of the intensely private Praveen who found the media glare after his wife’s death almost unbearable.

Neither he, nor the close-knit Indian community in Galway, who first approached The Irish Times about what had happened to Savita, had anticipated just how hugely significant the story would be.

The headline on the front of The Irish Times, on November 14th, 2012 declared: “Woman ‘denied a termination’ dies in hospital.” The story beneath told of the death two weeks previously of a woman, who had been 17 weeks’ pregnant, at Galway University Hospital.

Her husband, then a 34-year-old engineer at Boston Scientific in Galway, said she had asked several times over three days for a termination, once after she was told that she was miscarrying.

This was refused, he says, because the foetal heartbeat was still present and they were told, “this is a Catholic country”.

The political, constitutional and medical implications meant it became a big domestic story. Less foreseeable, perhaps, was the global reaction.

What shocked international observers, and also Savita’s family and friends, was that she had died after being denied what they regarded as a standard medical intervention. It bewildered as much as it horrified.

Inevitably, there was a rush, by pro-choice and anti-abortion campaigners to seize the narrative.

Savita’s death had nothing to do with abortion but was all about medical negligence, the anti-abortion lobby has maintained since.

Both the inquest and the HSE reports note that had abortion been a ready treatment option for Savita’s consultant, Dr Katherine Astbury, a different outcome was probable.

In the middle was a grieving family.

In July 2013, her mother, Akhmedevi told me: “She was always a happy girl.” Praveen has not talked publicly since April 2013.

The family have been extremely critical of the care Savita received during her first three days, but, equally, they have always praised the care given once she was moved into intensive care.

They have, however, always insisted that sepsis would not have occurred if a termination had taken place. The question of negligence would never have arisen.

The HSE did not contest their assertion, in their action for damages, that those caring for Savita had “placed far too great an emphasis on the existence of the foetal heartbeat” and not enough on her right to life. One hopes that yesterday will bring some closure for her family.