‘Give us half a chance,’ disability activist asks Enda Kenny 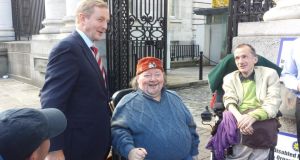 Taoiseach Enda Kenny says he will take on board points made by people with disabilities protesting on the street outside Government Buildings.

Just four hours into their three day-and-night vigil to highlight cuts to services over the last seven years, the group managed to get the attention Mr Kenny.

Martin Naughton, who is leading the campaign in which a number of disability organisations are taking part, said the protest was to draw attention to the inequalities, poverty and abuses experienced daily by people with disabilities and their families due to funding cuts and policy failures.

“We’re not going away. We could be here longer than 72 hours,” he said.

“We shouldn’t have to do this. We have to fight for our space in society. We’ve been ignored. I can live with never walking again but not to be condemned to a nursing home because of a lack of support.”

Mr Naughton said the decision to take to the streets was prompted by “appalling and alarming” reports about the treatment of people, mainly with disabilities, at some residential centres.

Mr Naughton said a €300 million investment in disability services and supports would be needed in Budget 2016.

He said almost €160 million had been cut from disability services since 2008.

Mr Naughton said the demonstration of about 20 would be joined by “many more” from across the country on Wednesday.

Cars hooted their horns loudly and people waved as they passed by in support of the protesters on the street.

Taoiseach Enda Kenny came out to the street and spoke with Mr Naughton and other protesters for about 20 minutes. Mr Kenny said it was good to hear examples of where funding could be better spent.

Mr Naughton asked the Taoiseach to listen to the voices of people with disabilities who wanted to live independently.

“We’re worth something and we’re going to show you that if you’re Government will give us half a chance.”

Mr Naughton, who uses a wheelchair, also told the Taoiseach was unacceptable that if he wanted to use public rail transport he needed to give 24 hour notice.

Mr Naughton told the Taoiseach the wait for the ratification of the UN convention on the Rights of Persons with disabilities had been eight years.

“We’ve happy enough to give you the pen for you to sign the UN convention,” he said.

Mr Naughton said the Taoiseach informed him he and Government Ministers would meet with the group on Wednesday or in the coming days. He said it was a great “boost” early in the campaign to meet the Taoiseach and hoped disability would be on the Cabinet agenda on Wednesday.

Mr Naughton said Ireland’s 600,000 people with disabilities and their families were at breaking point, and it was vital to get investment on disability policies and services.

These included the introduction of direct payments, self-directed living supports and the protection of personal assistant supports.

Michael McCabe, chairman of the Centre for Independent Living, said many people with disabilities had been effectively confined to their homes with cuts to disability services.

“All we want to do is to have the same opportunities as our non-disabled peers. Our protest is about basic human rights and equality,” he said.

Mr McCabe said he had cerebral palsy since birth and used a wheelchair. He said people with disabilities wanted to live independently and with their family with support instead of institutions.

“It’s much more cost effective this way,” he said. “We don’t want to be special, just equal to live a life like everyone else.”

Michelle Gaynor, from Portmarnock, said she was expected a very difficult night ahead in the cold of the night on the street. Ms Gaynor said she had taken part in a similar protest three years ago to stop cuts to budgets for frontline services and personal assistants.

“It’s very, very cold at night. This is a very drastic action to take. It’s frustrating having to do it yet again,” she said. “To the Government we’re statistics. Out of sight is out of mind. We’re real people with real lives. That’s why we’re here,” she said.