Five siblings set world record for each living over a century 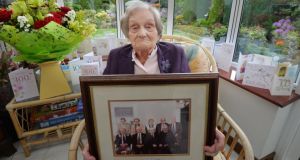 Madge Fanning celebrated being 100 years-old at her home in Skerries in May last year. She is holding a photograph of her with her siblings.Photograph: Alan Betson / The Irish Times

In between, there were another three brothers and, collectively, they would become the longest living group of siblings in the world.

In total, Joe, Charles, Pat, James and Madge would accumulate half a millennium, or 504 years of life, between them.

So much time. They shared their years of birth respectively with Walt Disney, John Steinbeck, Bing Crosby, Samuel Beckett and Alex Guinness.

Given their mother too had reached the centenary mark, the Clarke family initially thought they had a record in 2006 when James turned 100 in America, but they were told it only counted for siblings.

“We had to wait for mum to reach 100, which was in 2014 so that was (another) eight years,” explains Madge’s son Joe Fanning, who finally collected the Guinness World Record certificates this month.

Once her birthday had come and passed last year, Joe set about proving his family’s credentials as world beaters in life.

He set out on an arduous four month process of gathering records, photographs and supporting documentation that would comprise a 70-page dossier confirming the lifespan of his mother and uncles.

“Anything at all that would prove that these people had reached 100. It was just the birth certificates and the death certificates; I had to get it all out. I gave them as much as I could,” he said, with baptismal records, photographs and newspaper clippings all thrown in.

“She [his mother Madge] always knew she had it. She used to tell people in the hospital that it’s a world record.

“I was extremely happy and proud for them because it was something that we were looking at for a number of years. They were just a phenomenal family and now it’s a reward for them that they have this record.”

The Clarke children were born in Co Galway where their parents Charles and Margaret had a cattle farm in Mullagh, Loughrae.

Over the years they scattered but remained a solid family. From the original 13 came 79 children and 213 grandchildren.

And yes, everyone wants to know the secret.

“They all had great families around them whether it was direct family or not. Some of the daughters-in-law came in and they were brilliant. They all lived at home for the vast majority of their lives and they all had incredible faith,” Joe says.

“They had this great patience and an ability to communicate with you. They would always make you feel at home, their door was always open and there was tea in the pot on the table.”

Speaking about her own longevity at her birthday last year, Madge, who never smoked or drank, had some key pieces of advice for anyone hoping to cheat the clock.