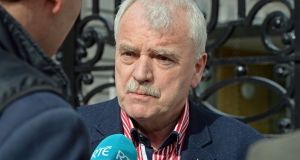 Minister Finian McGrath was among the Independent Coalition members who voted in favour of the Bill in July. Photograph: Eric Luke

Fine Gael and the Independent Alliance have begun discussions to avoid another breakdown of relations over abortion when a private members’ motion seeking an abortion referendum comes to the Dáil in 10 days.

The Anti Austerity Alliance-People before Profit group will bring a Bill to the Dáil on October 25th, Tuesday week, which if passed would provide for a referendum to remove Ireland’s constitutional ban on abortion.

The Independent Alliance wants a free vote on the Bill, which would enable its members to support the measure if they wished. However, Fine Gael wants an agreed Government position to oppose the Bill.

The last time the Dáil debated abortion, on a Bill by the Independent TD Mick Wallace to provide for abortion in the case of fatal foetal abnormalities in July, the Coalition split with the Cabinet unable to agree a common position.

The source of Fine Gael’s anger at the Independents – which both sides agree was the lowest ebb in relations between the two sides of Government so far – was not just that the Attorney General had advised the Bill was unconstitutional, but that the agreed programme for government had laid out a path for dealing with the abortion issue.

The programme provides for the setting up of a citizens’ assembly to discuss the ban on abortion and make recommendations.

However, the Independents said the issue of fatal foetal abnormalities was not dealt with specifically.

Taoiseach Enda Kenny told the Cabinet in July that such an open split – when the Government found itself unable to agree a common position, despite the constitutional doctrine that it must act collectively – could not occur again. However, Independent sources say they will again seek a free vote.

Fine Gael points out that the need for the Cabinet to have a collective position on private members’ motions is explicitly recognised in the programme. The two sides are understood to have met in recent days, and expect further discussions next week.

Meanwhile, the Citizens’ Assembly, which will discuss a possible repeal of the ban on abortion, will commence in Dublin Castle today.

The Taoiseach will address the gathering, which will then go into private session to discuss rules, procedures and a work programme. The assembly will begin its deliberations at the next meeting, in Malahide in north Dublin, on October 25th.

Judge gives landlord a week to halt Covid-19 parties near UCC 17:32
Brightest comet of the century visible in Irish skies for the next week 17:09
Planning permission granted for Waterford North Quays 16:55
Children who go abroad must self-isolate for 14 days before return to school in September 16:55
Coronavirus: One death, 25 new cases reported in State 17:49