Minor scuffles take place as a crowd of migrants wait to be registered on the second day of clearing the Calais 'Jungle' camp. Video: Reuters

The remains of makeshift shelters on the site of the refugee and migrant camp in Calais, France, on Monday. Photograph: Philippe Hilippe Huguen/AFP/Getty Images

Ireland should take in 200 unaccompanied minors who are stranded in Calais, France, Government chief whip Regina Doherty has said.

Ms Doherty last night told The Irish Times she did not know what the Government’s attitude would be to an upcoming Opposition motion, calling for the “immediate” relocation of 200 unaccompanied children from the migrant camp known as the ‘Jungle’.

It would be discussed at Cabinet on Wednesday, she said, and a position would be agreed then.

“But, speaking personally, I think we should do it. I think it’s a no-brainer. There are about 1,500 children and young people floating around there, in awful conditions, not knowing what’s going to happen to them.”

She said Ireland assisting France and Britain to accommodate the children would be a “responsible thing to do”.

The Fine Gael TD said it was likely statements on behalf of parties would be heard on Wednesday evening, and she hoped a joint-motion enjoying unanimous support could be put before the House next week.

Calls for the relocation of unaccompanied children – some aged as young as six – from the camp are being spearheaded by the Not On Our Watch campaign and supported by the Children’s Rights Alliance, the Immigrant Council of Ireland and the Irish Congress of Trade Unions. 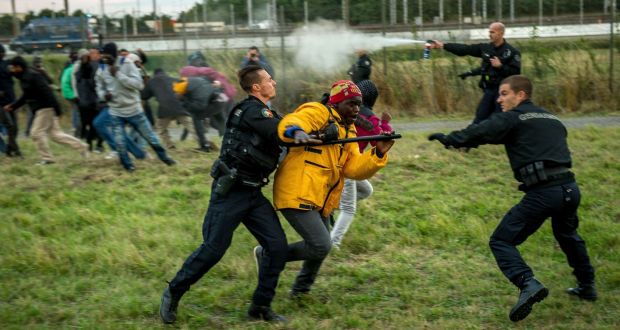 The make-shift camp in Calais, on the outskirts of the French port town, has been home to up to 8,000 migrants, fleeing war and poverty in countries including Syria, Kuwait, Afghanistan, Eritrea, Ethiopia, Sudan and Iraq, hoping to make the final leg of their journey across the English Channel.

French authorities have almost completed its demolition and dispersed about 6,000 adult migrants around France.

However, an estimated 1,400 children and teenagers remain and they are currently being accommodated in over 100 shipping containers.

Dozens of these children and teenagers, unable to get into the containers, are sleeping rough nearby – without access to education, sufficient food or money.

Irish woman Gráinne Hassett, who has been to Calais several times since last summer, said the young people are becoming increasingly fearful for their future.

About 300 are eligible for relocation to Britain, either because they have family there or because they qualify due to their vulnerability.

More hope to go but there is little prospect of them being able to do so, legally.

Many have risked lives, and suffered injuries, attempting to get onto trucks entering the Channel Tunnel.

Last month, a 14-year-old Afghan boy, who had the right to enter Britain legally, was killed when he fell from a truck and was hit by another vehicle.

The cross-party Opposition motion, to be circulated to all TDs today, calls on Taoiseach Enda Kenny “to act immediately to ensure the relocation of at least 200 of the unaccompanied children, currently living in ’The Jungle’ in Calais, to Ireland”.

A vigil, calling on the Government to relocate 200 of the children in Calais here, will take place outside the Dáil tomorrow evening from 7pm.

Thinking Anew – The safe option is not always what we need