Feminists and religious conservatives in strange alliance over transactional sex 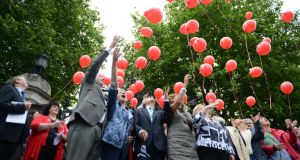 Supporters of the Turn Off the Red Light campaign at a demonstration outside Leinster House last year. Photograph: Cyril Byrne

Feminists and religious fundamentalists shouldn’t mix. If they do find common cause, it’s often a sign that one-dimensional moral or ideological fanaticism – rigid adherence, fuelled by heightened emotion, to absolutist messages and beliefs – has become more important than what happens to real people in the real world.

Take the planned introduction of new laws criminalising the purchase of sex in Ireland, north and south. In the North, the Human Trafficking and Exploitation Bill, proposed by DUP peer and staunch Free Presbyterian Lord Morrow, is now at the committee stage at Stormont. The Bill, which will make it illegal to buy sex, effectively conflates sex workers and targets of human trafficking, treating them not as two distinct and occasionally overlapping categories of people, but as one homogeneous group of oppressed and distressed victims. The apparently unthinkable notion of a woman, or indeed a man, actively choosing to make money from selling sex is entirely absent. Nonetheless, the Bill has been given an enthusiastic welcome by many women’s rights campaigners, especially Women’s Aid, which justifies its position with the claim that “anyone buying sexual services is supporting sexual slavery and the degradation of human rights”. (We don’t know what sex workers themselves think about the proposals, because nobody, it seems, bothered to ask them.)

Free choice
The picture in the South is similar. In June, the Oireachtas justice committee backed the introduction of laws against the buyers of sex. This was claimed as a victory by Turn Off the Red Light, an anti-prostitution campaign largely driven by Ruhama, a project of two of the religious orders associated with the Magdalene laundries, and the Immigrant Council, which was founded by a nun from one of those orders and is now directed by a self-described radical feminist. Here, too, the ramped-up talk is all of exploitation and harm, damage and coercion: the notion of free choice and personal agency is dismissed as an impossibility. It seems that prostitutes only exist if they are wrecked, passive creatures, destroyed by the abhorrent appetites of men, and willing to accept guidance and succour. There is a repeated emphasis on “sending messages”, both negative and positive: Turn Off the Red Light says that “if one woman is for sale this sends the message that potentially all women are for sale”. Criminalising clients, on the other hand, “send[s] a clear message” that in Irish society “it is not acceptable to buy another person like a commodity for personal gratification”.

Radical feminists and religious conservatives (or an unholy combination of the two) are able to lead the charge on this issue because both are driven by their united revulsion for transactional sex as a societal evil, either as moral vice or as a form of entrenched violence against women. Both groups are focused entirely on the symbolic “message” they wish to send to society at large: that prostitution is an abomination which must be routed out and eradicated for the good of all. And both are wilfully blind to the consequences of their sanctimonious stance for the very individuals they say they want to rescue and protect: the sex workers themselves, some of whom, inconveniently enough, refuse to allow themselves to be saved.

Flaw of criminalisation
Evidence from around the world shows that criminalising clients does not wipe out prostitution, or even substantially reduce demand. But it does hurt sex workers, placing them at increased risk of violence, exposing them to stress and ill-health, making them feel stigmatised and hunted and completely overlooked when it comes to decision-making processes.

Where buying sex is outlawed, it is the people selling it who pay the price. In 2012, UNAids , the Joint United Nations Programme on HIV/Aids, stated “the approach of criminalising the client has been shown to backfire on sex workers”, creating “an environment of fear and marginalisation”. What does that matter when the word has gone out – and been enshrined in law – that prostitution is morally and ideologically wrong?

Nobody in their right mind would condone the horrors of trafficking for the purposes of sexual exploitation, or indeed coercion of any variety, where it does exist. But to say that everyone who sells sex is a victim is patently untrue; worse, it is culpably disingenuous, refusing to admit the complicated reality of prostitution, and - for all the rhetoric of degradation and slavery – denying women and men working in the sex industry the power to make decisions, however unpalatable, for themselves.

By indulging in this pseudo-philanthropic meddling (“we know what’s best for you, you must be saved”) these ideologues, both secular and religious, also deprive sex workers of the second most important and hard-won freedom after the right to say no: the right – if they so choose – to say yes.