The final piece in our series on the working poor: A new wave of protest against low pay is spreading across the US this autumn.

Jamere Saunders and Danielle Wilson were among nine workers arrested at a protest on September 4th. Both are members of the Fast Food Forward movement who want an increase in the national minimum wage from $7.25 to $15 a hour. Video: Simon Carswell 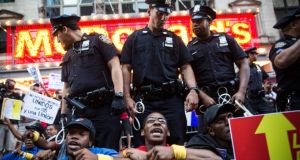 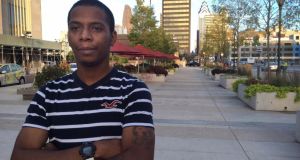 Jamere Saunders (25) from North Philadelphia, a worker at McDonald’s, is campaigning for an increase in wages for fast-food employees to $15 a hour. Photograph: Simon Carswell 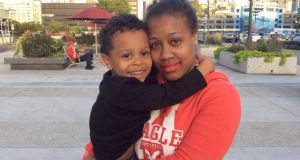 Danielle Wilson (21) and her son David (4) from Philadelphia. Wilson is campaigning for an increase in wages for fast-food employees to $15 a hour. Photograph: Simon Carswell

The “Fight For 15” campaign is such a part of Danielle Wilson’s life that her four-year-old son David knows the demonstrators’ chants off by heart. What she’d really like for him is to be able to bring him to the cinema or the zoo, if she could afford to.

Day-to-day life is a struggle. A single mother, she has rent to pay, along with water, gas, electricity and phone bills, but has to pick one bill to pay every week because she cannot cover them all.

“No matter how hard you work in the fast-food industry, the [pay] cheques don’t add up – it is not enough,” she said.

This young Philadelphian is one of a rapidly expanding movement of fast-food restaurant employees fired up by what they see as an egregious and growing institutional inequality between the top and bottom classes in American society between low-paid workers, who earn so-called poverty wages, and those who enjoy the benefit of “living wages”.

Here in Philadelphia, the so-called City of Brotherly Love where equality is one of its founding principles, this young black American woman – most workers at this end of the pay scale are people of colour – represents a new wave of labour activism spreading across the US.

Wilson was one of a group of 11 fast-food workers and supporters arrested for blocking traffic in Philadelphia on September 4th during a day of co-ordinated protests in 150 cities across the country.

They weren’t the only ones arrested – more than 450 demonstrators were detained that day from New York to Chicago to Kansas City to Nashville to Los Angeles.

“Workers need a McLiving,” “Super-Size My Wages” and “We Can’t Survive On $7.25” were the slogans on banners at Philadelphia’s protest.

“There are 17,000 fast-food workers in the Philadelphia area,” said Jesse Kudler, spokesman with the Fight for Philly campaign group, which supports the Fight For 15 campaign.

“Not all of those work for these big, huge profitable chains like McDonald’s, but a great many of them work for companies that certainly could afford to pay them more and take more from their bottom line.”

Another Philadelphia resident, Jamere Saunders (25), earns $8.25 an hour in his job as a floor supervisor at McDonald’s.

Like Wilson, he was also arrested on the September 4th “Fight For 15” protests.

Saunders has worked at the fast-food chain for two years and has received a raise of just $1 an hour. It isn’t enough for him to live independently. Day-to-day bills on his apartment were so high and his wages so low that he had to move back in with this mother.

“I am constantly struggling to pay my bills because my wages aren’t high enough, my hours aren’t good enough and my work is not appreciated,” he said.

Even though she works full-time, Wilson relies on US government assistance for medical bills and federal food stamps to feed herself and her son. It bothers her that she has to rely on federal assistance even though she has a full-time job.

“It angers me because I should be able to work and still have money left in my pocket after everything is paid off,” she said. “It angers me for the simple fact that GMs [general managers] and owners – they can live comfortably without having to depend on the government welfare, they can live comfortably knowing that when they go home, they have food, they have clothes, they have money, they don’t struggle every day.”

The Fast Food Forward and Fight for 15 campaign grew from a one-day protest on November 29th, 2012, when 200 workers in New York stopped work at 40 fast-food outlets, including Burger King, Kentucky Fried Chicken and Wendy’s and marched to Times Square. The New York Times called it “the biggest wave of job actions in the history of America’s fast- food industry.”

The campaign spread the following year to the American midwest and cities such as Chicago and St Louis, and to about 60 cities by summer 2013. In December, there were one-day protests in more than 100 cities.

“Nobody knew it would take off into a national movement. At its core were hard-working mothers and fathers getting up and going to work, helping corporations make billions of dollars, and who couldn’t survive on the poverty wage they were being paid,” said one of the campaign’s leaders, Jennifer Epps- Addison, executive director of the Wisconsin Jobs Now community-based organisation.

The fast-food workers movement has its inspiration in the Occupy Movement, the grassroots campaign that helped shine a light on inequality and marked its three-year anniversary this month.

From the beginning the campaign shared similar goals to President Barack Obama. In his annual state of the union address in February 2013, he called on Congress to pass a Democratic-tabled Bill that would raise the national minimum wage to $9 a hour “so that it finally becomes a wage you can live on,” he said. It was the first time in his presidency that he sought an increase.

The Bill would also link future increases in the minimum wage to inflation so it kept up with the cost of living.

He went further this year, calling on Congress in his January 2014 state of the union speech to raise the minimum wage to $10.10 an hour.

The following month he signed an executive order requiring all federal contractors in 2015 to raise their minimum hourly wage to $10.10.

A divided Congress, gridlocked by squabbling Democrats and Republicans, makes any increase in the wage a near-impossibility. This has prompted states and cities to act on their own and introduce their own increases in the absence of a federal raise, while political paralysis in Congress has helped fuel the fast-food workers’ campaign.

Thirteen states and the District of Columbia have already raised their minimum wage, and four more states have tabled a wage increase on the ballot in November’s elections.

Seattle introduced a $15 per hour minimum wage earlier this year and more cities plan to vote on increases.

“There is no denying the simple truth: America deserves a raise,” Obama told an audience in Milwaukee on Labour Day, September 1st calling again from his bully pulpit for the wage to be increased.

But even the president’s increase to $10.10 an hour is modest, given that the minimum wage has failed to keep pace with the cost of living. The minimum wage was at its highest point in 1968 when it was, in 2013 dollar terms, $9.40.

If the minimum wage had just kept up with inflation, it would be $9.40 a hour, but if it had kept pace with productivity in the economy, it would be $18.30 in 2014 dollar terms, according to the Economic Policy Institute, a left-leaning think tank.

Attempting to counter the misconception that most fast- food workers are teenagers or students, the institute released a survey last year showing the average age of low-paid workers is 35 years old; 88 per cent are at least 20 years old and a third are at least 40 years old.

“For a lot of people, there is this sense out there that a McDonald’s job isn’t supposed to be a career,” said the institute’s spokesman Dan Crawford. “It is supposed to be teenagers working or college students working for extra spending money. More and more these are people’s careers and people’s real jobs, and their salary is not reflecting that.”

Republicans claim that raising the minimum wage would cost jobs. In February the non-partisan Congressional Budget Office said an increase to $10.10 would cut employment by about 500,000 jobs, but lift almost a million Americans out of poverty.

The Economic Policy Institute said last year that the increase would create 85,000 jobs by putting more money in people’s pockets and more spending in the economy.

An increase to $15 would give workers income of $31,200 a year – “not enough to get rich off but to be able to afford their food, a place to live and health insurance,” said Epps-Addison.

The campaign for this living wage is “really about righting the American ship and reinvesting in and building the middle class in this country,” she said.

“You are probably going to be able to pay one more bill, but it is not enough,” he said.

Saunders tried making ends meet by taking a second job, working for the American Society for the Prevention of Cruelty to Animals, cleaning and rehousing abandoned dogs.

He was fired from that job after a year because he was constantly late. McDonald’s wouldn’t give him a fixed schedule to work overnight so he could clock off at 7am and still make the hour’s journey to start his second job every day at 8am.

Wilson also attempted working a second job, from 2pm to 10pm at Dunkin’ Donuts, but McDonald’s wouldn’t change her 7am to 3pm working hours that would have allowed her to juggle both jobs.

She just wants to make enough for herself and her young son so she can give him the life she wants.

“I want to be able to live comfortably and still provide for my needs at home, and also for my son’s wants,” he said.

“He is four. Every child wants to do certain things and have fun. You have to have a childhood. I don’t want to ruin that by taking that away from him.”