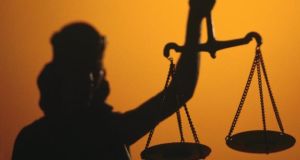 The family of the man with an intellectual disability who was assaulted by a care worker has urged anyone witnessing ill-treatment in care facilities to report it to gardaí.

Joe Duane’s sister, Marcia said Tuesday’s court hearing marked the end of a long road for her family including her mother, Leonora and brother, Russell who accompanied her to court.

“Joe is a son, a brother and an uncle who is deeply loved. I am his sister.

Joe is autistic, non verbal and a valued member of our family,” she said speaking outside of court.

David Atkinson (41), originally from Wales, was fined €500 after he was convicted of assaulting Mr Duane (32), at House No 5, Arderragh at the Cope Foundation, Montenotte, Cork on October 22nd 2013.

Reading from a prepared statement, Ms Duane said that her brother has “endured a lonely, sad and difficult time because those who were trusted to look after him failed him”.

She noted that Joe was in the care of the Cope Foundation and the State when he was assaulted and she paid tribute to two members of Cope staff who reported the assault.

“Unfortunately, Joe does not have a voice and were it not for the courage of these two ladies, this incident would have gone un-investigated and the truth would not have been known,” she said.

“We can only earnestly urge all those who work in care facilities and who witness ill-treatment to report it to the gardai. The gardai have done a great job in very difficult circumstances.”

Ms Duane paid tribute in particular to garda Alison O’Flynn for her work on the case and she described the last 18 months as a time of great stress for both Joe and her family.

“We are saddened that nobody has yet apologised to Joe or to us for the pain and suffering he endured. Today, brings to an end an ongoing and lengthy nightmare,” she continued.

“We just hope that others, like the two ladies in Joe’s case, may be encouraged to speak up for those who have no voice, the most vulnerable members of society.”

Cope Foundation later issued a statement in which it said it was deeply concerned at the incident and confirmed that Mr Atkinson was no longer employed by the organisation.

“Immediately following this incident coming to our attention, Cope Foundation, in accordance with its required policies and procedures, informed all of the relevant authorities and parties, including An Garda Siochana and the victim’s family.”