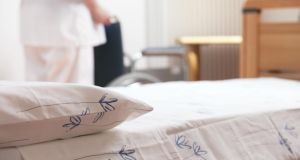 Beaumont Hospital has confirmed that it is conducting an investigation into complaints about the treatment of a man in his 80s.

Families who say their relatives are being mistreated in State-run care facilities have urged TDs to introduce stronger laws to help prevent abuse of vulnerable people.

Support Link, a campaign group which represents families and whistle blowers, met TDs in Leinster House to highlight a range of new allegations of neglect and abuse in nursing homes and care facilities for people with disabilities.

Lourda Finn, whose father’s death in a HSE-run care facility was subject to two investigations, said families had little faith that their complaints were being taken seriously.

“We’ve been contacted by families across the country – in hostels, nursing homes and other areas – where residents are being mistreated, over-medicated or locked in rooms as a result of understaffing,” she said.

“These vulnerable people are at a very high risk. Despite what we saw at Áras Attracta last year, there has been no move to introduce the kind of safeguards needed to protect vulnerable people.”

Ms Finn said she had been banned from seeing her father at a HSE-run dementia care unit in Ennis, Co Clare, after raising concerns over standards at the centre.

Despite investigations into her father’s care, she said many of the findings had not been made public and key recommendations had not been implemented by authorities.

“The system is failing the most vulnerable and we need new legislation to ensure that concerns over treatment are automatically passed on to the gardaí and investigated immediately, as is the case in parts of the US,” she said.

Maeve Kennedy, another member of the support group, said she unsuccessfully tried to highlight concerns over the restraint of people with intellectual disabilities at a HSE-funded care facility over the past three years.

She said her brother eventually relocated to another facility, after being admitted to hospital with marked body bruising and lacerations to the head after a fall.

The HSE says it urges all staff and clients to make complaints where they are aware of abuse or bad practices towards any vulnerable people.

The executive has pledged to respond to all complaints and has moved to establish a “confidential recipient” in recent months, who will deal with complainants in a sensitive manner.

Meanwhile, Beaumont Hospital has confirmed that it is conducting an investigation into complaints about the treatment of a man in his 80s.

The family of Gerry Feeney says that despite concerns over his breathing, he was kept for almost a week on a overflow ward as a result of overcrowding in the hospital’s emergency department.

His family told RTÉ news he was later moved to a geriatric ward where his family says he was found in a soiled state, in public view.

In a statement, the hospital said it regretted the serious issues and concerns raised by the family.