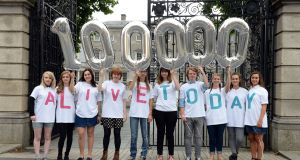 More than 100,000 lives have been saved in Ireland by the Eighth Amendment to the Constitution, a report from the Pro-Life Campaign has estimated.

The actuarial report was commissioned by the group “to show the Eighth Amendment is life-saving” and to challenge the assertion by those in favour of repealing the amendment that it had not reduced the Irish abortion rate.

The report was published on Wednesday, which was the 33rd anniversary of the referendum which resulted in the amendment being inserted into the Constitution.

The amendment, Article 40.3.3, pledges to “defend and vindicate” the equal right to life of the unborn and the mother, “as far as practicable”.

Pro-choice campaigners argue the amendment has simply resulted in women having to travel abroad for abortion, and has not reduced the Irish abortion rate.

However, the Pro-Life Campaign said this claim was “mistaken”.

“At a very conservative estimate there are tens of thousands of Irish people alive today precisely because of the protection that the Eighth Amendment gives to the unborn,” the report says.

The report says that in 2014, some 5.2 per cent of pregnancies in Ireland were ended by abortion (performed outside the jurisdiction), while the rate in Sweden was 24 per cent, 21 per cent in England and Wales and 18 per cent in Spain.

The report also estimates how many abortions would have been performed on Irish women between 1994 and 2014 if abortion rates in other countries prevailed here.

During this period, 108,000 abortions were performed on Irish women and girls in England and Wales.

According to the report, Ireland would have had 304,000 abortions over those 20 years if it had the abortion rate of England and Wales, which meant that some 196,000 pregnancies that would have been terminated were continued to term .

It estimates that if the Spanish rate prevailed here, there would have been 229,000 abortions over the period, meaning “121,000 Irish citizens would not have been born”.

The report does not look at how many of the terminations would have been of foetuses with fatal anomalies, or would have miscarried anyway, although the Pro-Life Campaign said its estimates were “conservative”.

Asked whether there was a concern that many of the abortions not performed were a result of women or girls being unable to travel and forced to continue crisis pregnancies, Cora Sherlock, spokeswoman for the Pro-Life Campaign, said the point of the report was simply to open a “long overdue” discussion on the “truth that repeal of the Eighth Amendment would inevitably result in more lives being lost”.