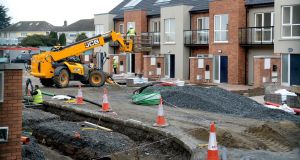 Residents living near a new housing development in north Dublin, which is to be used for social housing rather than sold on the market, are concerned about a potential rise in anti-social behaviour.

Housing association Túath has bought all 68 homes at Thornwood, a development nearing completion in Beaumont, and plans to begin allocating the 46 houses and 22 apartments to households on the Dublin City Council waiting list in “late spring”.

The homes were bought with a loan from the Housing Finance Agency and funding approved by the Department of the Environment.

The developer, Grandbrind Ltd, was unable to sell them at a profit on the open market.

Local residents are unhappy, however, saying the plan to allocate 100 per cent of the units for social housing was finalised “without local consultation”.

Beaumont Residents Association has engaged planning expert John Downey to assess whether a new estate can be 100 per cent social and he is to address their meeting tonight.

“We welcome integrated social housing. The issue is the way this was lobbed into the community, out of the blue, without consultation.”

Michelle Mullen has lived in Collinswood, a private estate adjacent to Thornwood, with her husband and two children since 2010.

“It is well known that a high concentration of social housing is associated with anti-social behaviour,” she said.

“In 2010 we left a mixed-tenure estate in Blanchardstown where my car was broken into four times in six years. Since we moved here it hasn’t been broken into or vandalised once.”

They saved and “just broke even” when they sold their house to move to Beaumont.

“People around here are all working, out all day. There will be a high rate of unemployment among these people. They’ll be around all day.”

“I think it’s disgraceful. The 100 per cent social, it’s too many. You don’t know who’s going to go in there.”

Her neighbour, Tony Treacy, however, said it didn’t “really bother” him. “I wouldn’t object to it. What are you going to do about it? People have to live somewhere.”

A spokesman for Dublin City Council said Túath’s proposal to buy the homes was “carefully considered and approved”.

A spokesman for Túath described comments from some local residents as “ill-informed and discriminatory”.

“Túath provides homes for ordinary people, mostly decent working-class people, some of who may have had mortgages before or have been unfortunate and lost their homes due to unemployment or massive rent hikes.”

There would be a “stringent” process in choosing tenants, he added.

“Túath will be working hard to ensure that Thornwood is a safe, secure and popular place where families choose to settle down and where being a good neighbour is key.”