Department of Housing fails to respond to council housing committee 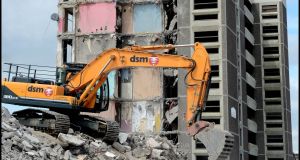 The Ballymun flats which were demolished as part of the regeneration project. Photograph: Brenda Fitzsimons

Dublin City Council has been left short almost €17 million in rebates from the Department of Housing for money spent on the regeneration of Ballymun.

The council is seeking the reimbursement of €16.8 in capital funding from the department some of which has been owed for up to six years, according to its finance committee.

Ballymun Regeneration Ltd (BRL), the company set up by the council in the late 1990s to manage the redevelopment of the troubled north Dublin suburb, has been wound up, but money spent on several projects, including the removal of pyrite that caused structural damage to some of the buildings, has not been released by the department.

The chairman of the council’s finance committee, Cllr Ruairí McGinley (Independent), wrote to the Department of the Environment in July 2015 seeking to recoup the money spent by BRL, as responsibility for the final accounts had transferred back to the council.

In a response in August 2015, the secretary general of the department, John McCarthy, acknowledged the council had made submissions to the department to draw down money in relation to the final accounts of regeneration projects.

“We have indicated to the relevant officials in the city council that we are committed to completing our examination of this documentation as soon as possible,” his letter said.

However, despite a payment of just over €1 million being made late last year, almost €17 million remains outstanding, Mr McGinley said.

He again wrote to Mr McCarthy two months ago stating the €1.2 million payment was “grossly inadequate” and asking that the €16.8 million be paid, but despite a second letter sent last month, no response was received by Mr McCarthy.

Ballymun-based councillor Noeleen Reilly of Sinn Féin said some of the projects on which the money was owed had been completed several years ago.

“The department have given no valid reason for not paying over this money. It is very bad form and doesn’t bode well for the future of the housing projects that the department says it is going to fund.”

Labour councillor Dermot Lacey said it was “shameful” a Government department had not paid its bills. “If you don’t pay your bills over five or six years, that’s theft.”

A spokesman for the Department of Housing said discussions were ongoing in relation to the money being sought by the council.