Donegal priest says he will vote Yes in marriage referendum 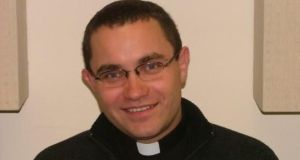 Fr Brian O Fearraigh, who is based in Gweedore, has said the State cannot be seen to be discriminating against its citizens. Photograph: Highland Radio.

A County Donegal priest has said that he will be voting Yes in the upcoming same-sex marriage referendum.

Fr Brian O’ Fearraigh, who is based in Gweedore, has explained his decision saying “I believe that in voting yes the State will be recognising and cherishing the rights of all its citizens regardless of their sexual orientation”.

Speaking on Highland Radio, Fr O’Fearraigh said the State cannot be seen to be discriminating against its citizens, adding “I do not think that the church will be forced into changing their beliefs on marriage, I believe that that is a separate issue altogether”.

Fr O Fearraigh said he had an “extremely clear” conscience on the matter and that the reality of same-sex marriage is “a reality which in no way threatens me or offends me as an individual, as a priest or ultimately as a citizen of this State”.

The Bishop of Raphoe Philip Boyce, who is the Bishop of Fr O’Fearraigh’s parish of Gweedore, issued a pastoral letter last weekend advocating a No vote.