Refugee council ‘deeply concerned’ about the 4,000 people already in the centres, some of who have been there for a decade 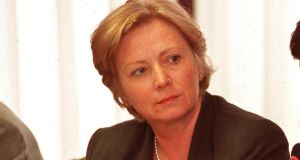 Minister Frances Fitzgerald: the Department of Justice said the refugees would only be in the centres for a number of weeks. Photograph: Dara Mac Donaill

The plan to accommodate 3,500 of the more than 4,000 expected refugees and asylum seekers in direct provision centres is “inhumane”, according to NGOs in the sector.

The Department of Justice confirmed yesterday that while the first 520 “programme refugees” committed to by Minister Frances Fitzgerald in May would be coming as part of a UNHCR resettlement programme, and accommodated in a Kildare hotel before being relocated around the State, the remaining 3,500 were coming under a different EU relocation programme.

Rachel Doyle of the Community Workers Co-operative described the plan as “inhumane” and called on the Minister to rethink this.

A spokesman for the department said the refugees would only be in the centres for a number of weeks, after which if they get asylum they would be free to work and find their own accommodation, or apply for social housing.

A spokeswoman for the Irish Refugee Council said it was “deeply concerned” about the 4,000 people already in direct provision, some of who have been there for a decade.

The department said the Protection Bill, which would give effect to many of the working group’s recommendations around the legal process, would be published “in the coming weeks”. An additional budget had been allocated “to deal with the major increase in asylum applications”.

The 4,000 new refugees would need “immediate” help with integrating into unfamiliar surroundings, NGOs have said. They also stress the importance of preparing communities for their arrival as well as having a community input into the new arrivals’ welfare.

NGOs and community workers, with expertise in integration, should be included in the process.

Their ability to settle could be hampered without help with such basic things as how to use the Irish phone system, or help with making links in their communities, an Irish Red Cross spokesman said.