Opinion: Ireland has made huge progress in evolving towards full equality for LGBT people 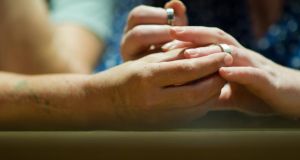 Equal access to marriage is fundamental to the status and dignity of lesbian and gay people.

This has been a historic week for equality and human rights in this country. Firstly the Cabinet decided to accept the overwhelming recommendation of the Constitutional Convention and hold a referendum on equal access to marriage for lesbian and gay couples in 2015. Shortly afterwards, the Taoiseach confirmed his support for marriage and stated that he and the Government will campaign for it in the referendum.

Equal access to marriage is fundamental to the status and dignity of lesbian and gay people. It sends out a powerful signal that our relationships and families are equal to others. The Government is to be congratulated for taking another historic step in the remarkable journey to equal marriage and full constitutional equality for lesbian and gay people. The Tánaiste and the Labour Party have been crucially important in prioritising the issue, building towards this week’s announcement. Fianna Fáil and Sinn Féin and the work of many groups, including Marriage Equality, the Irish Council for Civil Liberties, the Equality Authority and Irish Congress of Trade Unions and the work of many LGBT people and allies have played critical roles in getting us to this point.

Ireland has made huge progress in evolving towards full equality for lesbian, gay and bisexual people. Decriminalisation just 20 years ago was followed by powerful equality legislation which gives significant protection from discrimination to lesbian and gay people and to other vulnerable groups, making Ireland one of the first countries in Europe to do so. In 2010, all political parties supported the passage of civil partnership which went as close to marriage as was possible within the constitutional limitations.

The Civil Partnership Act has been a fundamental step towards civil marriage. The overwhelming public support for the 1,500 civil partnerships that have already taken place has transformed the visibility and status of lesbian and gay relationships. Now, the love and commitment of lesbian and gay couples is seen as the same as that of other couples. This new understanding has been central to the evolving public and political support for marriage.

Public opinion
This perspective was captured perfectly in a Longford Leader editorial last year which said: “For many people, the term civil partnership has become interchangeable with the term marriage. As far as they are concerned, they are attending the ‘wedding’ of their gay or lesbian friends. The reality is that the tide of public opinion has just shifted towards an acceptance of gay marriage.”

There are lesbian and gay couples all over Ireland who are bringing up children. The lack of State recognition and protection for these families carries significant consequences for their children. There is an urgent need to reform family law to recognise and support lesbian- and gay- headed families and other diverse families and provide the security and certainty that other families enjoy. We strongly welcome the Government’s commitment to prioritise the changes to family law. This will have a hugely positive impact on lesbian and gay families. With the comprehensive rights and obligations of civil partnership already in place and forthcoming family legislation, civil partners including those parenting children would have almost all the legal rights of marriage except equal protection in the Constitution. This constitutional recognition is critical for the status, standing and dignity of lesbian and gay people.

Positive debate
While the opinion polls have consistently shown a majority in support of equal marriage, we cannot be complacent. We will need a determined campaign throughout the country, involving all political parties and all groups and individuals committed to equality. We hope for a positive debate over the next 18 months – the way we campaign must mirror the society we want to live in: tolerant, open and respectful of differences. Ireland would be the first country in the world to bring forward marriage through a referendum and a positive vote would enhance our international reputation as an open, diverse and welcoming society. It would also strengthen progress in other areas of equality and human rights.

We have seen the generosity and fairness of the Irish people all through the journey to equality for lesbian and gay people. These qualities will be to the fore again as we vote on opening up the valued institution of marriage to lesbian and gay people. We believe Irish people will support a yes vote. As Ciarán Cannon, Minister for State at the Department of Education, put it recently: “Today I am celebrating the joy of being married to my best friend for 23 years. That unique joy shouldn’t be denied to anyone in Irish society.”

Kieran Rose is chair of Glen, the Gay and Lesbian Equality Network