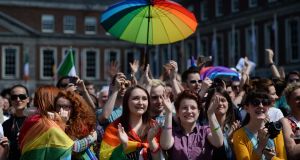 There were 91 same sex marriages in the last six weeks of 2015 after they were legalised for the first time, figures from the Central Statistics Office show.

The Marriage Equality referendum was passed in May last year and came into effect with legislation on November 16th. The figures show that up until the end of December 47 male couples and 44 female couples tied the knot.

Kieran Rose of the Gay and Lesbian Equality Network (Glen) said the weddings were “ a tribute to the generosity of the Irish people in giving full equality to their lesbian or gay family members, friends and neighbours” .

Figures also show brides and grooms are waiting almost a decade longer to get married than they did in the 1970s.

The latest data on marriages and civil partnership show the average age of those getting married was at its highest last year since records began.

The CSO statistical bulletin gives a wealth of information about ages, socio-economic class, religious ceremonies, regional variations, the most popular days and months for marriage and, for the first time, some basic data on same sex marriages.

Two thirds of marriages were religious ceremonies last year, with Roman Catholic the most popular, accounting for 56.7 per cent.

The most popular month to marry was August- for the fourth consecutive year – when there were 2,927 (26.5 per cent) weddings, with January the least popular, with 767 ceremonies (3.5 per cent).

Friday and Saturday were the most popular days of the week, with Sunday the least.

In the ‘skilled trades’ category, 2.5 per cent of grooms and 39 per cent of brides married within their group.

Comparing rates across the EU, in 2013 (the year with the most recent data for EU) Ireland ranked 13th in the EU, with a marriage rates of 4.5 per thousand. Lithuania had the highest rate with 6.9 per cent and Slovenia the lowest at 3 per 1,000 people.