Some 17,000 have registered to become enumerators in the forthcoming census 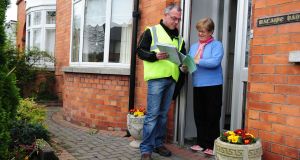 Enumerator Sean O’Hanlon with Jan Moore in Glasnevin, Dublin, during Census 2011. The CSO is no longer accepting registrations from those who wish to become enumerators in Census 2016. File photograph: Aidan Crawley

The Central Statistics Office (CSO) is no longer accepting registrations from those who wish to become enumerators in the forthcoming census, because of the number who have already registered.

By mid-afternoon on Tuesday, some 17,000 people had registered to be considered for appointment as enumerators, 13,500 of whom have applied formally for the positions.

The appointed enumerators must distribute and then collect more than 2.3 million completed census forms from households in their local areas.

Enumerators can earn up to €2,400 for their work over a 10-week period around census day, April 24th.

There are 4,660 enumerators required for the census.

Due to the volume of registrations, the CSO, which carries out the census and analyses data collected, is no longer accepting new names.

“People who have registered already can still apply to be appointed enumerators, though we are no longer accepting new registrations,” said CSO spokesman Tony Downes.

He described the response to the call for applications for the positions as “a very pleasant surprise”.

Applications from among those who have already registered will be accepted until Friday, January 8th.

“After that [date], all applicants will be interviewed, starting in late January, over a two- to three-week period, and the 4,660 appointments made,” said Mr Downes.

Age Action Ireland on Tuesday urged the CSO not to bar applicants for the enumerator positions who are over the age of 70.

The CSO has said that it must bar applicants over this age, under the terms of the Public Service Pension Act 2012.

This act prohibits anyone over the age of 70 from joining the public service pension scheme.

“No one is going to be on a public service pension when the census is complete.

“Pension contributions docked from the pay of census workers are returned to them when their contract ends.”

However, Mr Downes said that the CSO, as a public body, had to abide by the law.