Opinion: Fewer than 200 organisations so far have voluntarily adopted the statement of recommended practice 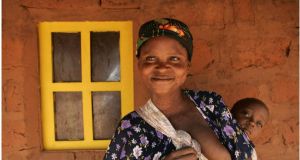 Mother and child at a Concern district development project in Mozambique. Concern is one of the charities that have adopted the Statement of Recommended Practice. Photograph: Dara Mac Dónaill

Whatever the ramifications of the pay top-ups revelations for healthcare organisations, every charity in Ireland is feeling the impact of public concern about the uses to which their money is put.

Many vital services risk being undermined. The greatest asset of charities – the public’s trust – is under threat and regulation is overdue.

Nonprofits represent a very significant part of the economy. They are present in every locality and sustain essential services and assistance to vulnerable people. In 2012, Irish nonprofits employed more than 100,000 people with pay costs in the order of €3.5 billion, total income of more than €6 billion, and holding assets valued at more than €3.5 billion.

The Charities Act – which came into law in February 2009 but whose implementation was deferred – expressly provides for the Minister for Justice to regulate for narrative and financial disclosure standards. Were these standards in force, they would require every charity of any significant scale to provide a report on the sources of their revenues, the pay bands of their highest-paid employees, the costs of their governance and the specific uses to which they put income and assets.

Compliance too easy
Potential donors, journalists and others interested in charity disclosures look in vain for this information in audited financial statements filed with the Companies Registration Office. An incorporated charity (there are no disclosure requirements on unincorporated ones) may report income from all sources as a single figure; provide no analysis of overhead as opposed to programme costs; and use a boilerplate directors’ report with no information about its charitable activities, and yet still be in compliance with company law.

The Statement of Recommended Practice for charities is mandatory in England, Wales and Scotland. Pending the creation of a Charities Regulator, its use is voluntary here. To judge from a recent seminar in Dublin, the Minister is considering adopting a similar standard here. A handful of smart Irish charities have beaten him to it, including Concern Worldwide, the Irish Cancer Society, and Irish Guidedogs for the Blind.

The difference between those that have voluntarily adopted the recommended practices – fewer than 200 – and the 8,000 or so incorporated charities that use conventional reporting standards, is that the early adopters explicitly acknowledge that the public has a legitimate interest in what they do with their money.

It is no accident that the largest grouping of Irish charities using the recommended practices is in the overseas aid sector. They compete internationally for funding from governments, foundations and governmental agencies where charity-specific standards of financial and narrative disclosure are the norm.

Sluggish legislation
It is time the Government caught up. Work on charities legislation here began so long ago that the generation of civil servants responsible for drafting it has retired. It probably is “complicated and difficult”, to quote Brendan Howlin, to find out what’s going on in charities if the current piecemeal approach is to be used. How welcome it is to hear the Minister for Justice is now planning to put the Charities Act into force.

While they’re waiting, there’s no reason why the Health Service Executive should not set the charities’ Statement of Recommended Practice as the reporting standard for the 16 voluntary acute hospitals and the 25 non-acute voluntary agencies funded under section 38 of the 2004 Health Act. Unlike section 39, which permits the HSE to provide discretionary assistance for certain bodies providing a wide range of services and supports, section 38 provides for funding agreements to be made with health service providers for the delivery of services to which the public is entitled.

In practice, ‘section 38 grants’ go to a small number of major institutions with hundreds or even thousands of staff. Section 39 grants go to about 2,000 smaller nonprofits, many of whose chief executives receive a salary lower than some of the top-ups reported in recent weeks.

Perhaps it is time for the HSE to set a standard of disclosure that delivers better comparative information about the major healthcare charities. And maybe it is time more charities were to do it anyway, without being asked.