Population decline in peripheral areas of every county to cause problems, says expert 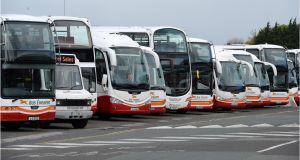 Justin Gleeson of the All-Island Research Observatory said transport was likely to become an issue in peripheral areas due to the age of people living there. File photograph: Dara Mac Dónaill/The Irish Times

Rural isolation and transport are key issues “coming down the line” for policymakers due to significant population decline in rural and peripheral areas of every county, according to the director of the All-Island Research Observatory.

Justin Gleeson was speaking after the publication of official figures from Census 2016, which show the population of the State has grown 3.7 per cent, or 169, 724, in five years. The total population is now 4,757,976.

Mr Gleeson said that although the overall figures were “very positive” for the Republic, “it isn’t all growth”. There has been “a lot of decline” in the population of many rural and peripheral areas “in every county across the country”.

“That has an impact on service delivery down the line, such as post offices and Garda stations. These areas have quite an old age cohort so issues like rural transport, isolation, all that type of stuff, will be coming down the line.

“Up to 2030 we’re going to see a big increase in the elderly population in Ireland, particularly in some Border areas, western areas and so on. There are just less young people in a lot of rural areas, and these areas are not being repopulated.”

The State’s birth rate is “still very high” with particularly fertile areas along the east coast. That will also have implications for services, Mr Gleeson said, as there will be a large influx of young people in those areas.

“There is a very young population cohort in areas like Fingal, Kildare, and Meath, which will have an impact on what services are needed.

“If you roll forward 10 years there is a wave of people heading towards third-level education, and it is going to take work to ensure universities and educational institutions are equipped to manage this influx that is coming down the line.”

The increase in population over the past five years has been “more marginal” than previous censuses, but Mr Gleeson said the data suggests the number emigrating in recent years may have been “over-estimated”.

In terms of housing, many of the dwellings that were lying empty “are all pretty much full now right across the country”, and vacancy levels in Dublin and commuter belts have decreased significantly.

“When you look at the Dublin areas and the commuter areas there has been a big increase in population but the housing doesn’t seem to be there to support it, and that’s borne out in the very low vacancy rates.

“There is a lot of pressure in some areas. All of this points to pressure in the housing market and difficulties getting people access to suitable housing down the line.”