Case Study: Search for a school place started before Avery (2) was born 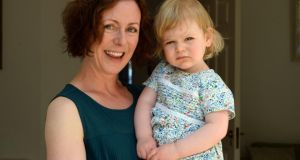 Both atheists, they would not be having her baptised and they knew this would limit her access to schools.

“I was brought up Catholic and Malcolm Church of Ireland. Neither of us has been religious in any way since our teens though,” says Nicole. “To have Avery baptised . . . would almost be like asking Muslim parents to have their daughter baptised. It would be completely hypocritical.”

Avery will need a school place in September 2018.

“Our preference is for Educate Together. Just after Avery was born I applied for the Educate Together schools at Griffith Barracks, Ranelagh and Rathfarnham, and then for Canal Way and Firhouse.”

Firhouse ETNS, which opened in 2013, is under pressure from the Department of Education to prioritise children from its catchment area and Avery lives outside it, so her chances there are slim.

Nicole feels it is “not fair” that parents who want the ET ethos for their children, but live outside the catchment area of an ET school, may have less chance of getting a place than religious parents in the school’s area.

She is one of more than 800 parents in the Dublin 6 area who are seeking a new ET national school in the area.

“It’s upsetting and I am worried. Ideally there would be no religion in schools. Until then, ideally, there should be an ET school opened in every area where the schools are oversubscribed. Fingers crossed the Department of Education listens to parents in this area.”