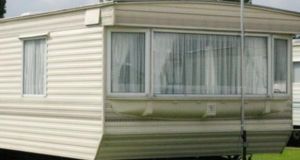 Caravans belonging to Traveller families were removed from a site in Dundalk on Saturday morning as an operation by Louth County Council to evict them continued.

Caravans belonging to Traveller families were removed from a site in Dundalk on Saturday morning as an operation by Louth County Council to evict them continued.

The council said on Friday night it would help secure temporary accommodation in the private rented sector for a group of families which it began evicting yesterday from a disused halting site.

The council has said its decision to seek to remove the families was based “solely on its concerns for people’s health and safety”.

However, the families said they had nowhere to go after their caravans containing their belongings were removed from the council-owned site at Woodland Park.

Gardaí, including the armed Regional Support Unit and the Public Order Unit, were at the scene from early Friday morning and returned early on Saturday.

Rebecca Quinn, who had been living on the site, said one woman’s caravan was seized on Saturday morning and that she now had nowhere to go.

“They seized the woman’s caravan and would not let her back in to collect her belongings,” Ms Quinn claimed. “This was done in such an undignified way.”

About six families living in larger mobile homes will remain there until arrangements can be made to move them next week.

Woodland Park was an official serviced halting site for many years, but was closed in 2008 due to what the council said was, “a lack of interest among the Traveller community in utilising the site”. Utilities on the site were also shut off at that time.

About 20 families had moved onto the site since last April and the council said it sought to relocate them because of concerns over site safety, including poor sanitation.

In a statement on Friday night, the council said its chief executive and director of services met with representatives from the Traveller community on Friday.

Agreement had been reached with the representatives and those Travellers who were also present in the council offices.

“On foot of this agreement, the site will be vacated and a commitment was given by Louth County Council that a review of the Louth Traveller Accommodation Programme would commence, with a view to providing Traveller-specific accommodation, specifically group housing.

“In the meantime, it was agreed that those on the site will secure temporary accommodation in the private rented sector with the assistance of the council, and that Housing Assistance Payments can be arranged for all qualified applicants.”

It said the review of the programme would commence “as a matter of urgency” and that the provision of permanent Traveller-specific accommodation would be arranged as quickly as possible.

Louth TD and Sinn Féin leader Gerry Adams said on Saturday said he had met the 17 families on the halting site before Christmas and would return either on Saturday or Monday. He said he had asked that the council provide, in the long term, accommodation specific to the cultural needs of the Traveller families.

He said he was “disappointed” that the council had involved gardaí.

“I have no complaint against the gardaí. They are really only doing what they were directed to do.”

But he said the action had been “totally inappropriate” and “heavy-handed”.

Traveller rights group Pavee Point has called on Minister for the Environment Alan Kelly to intervene as a matter of urgency to compel the council to provide alternative accommodation for the families.