Campaigners argue that caring should be classified as ‘public health concern’ 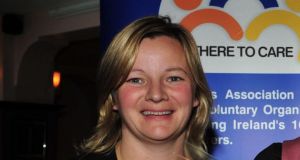 Catherine Cox of the Carers Association: “If the carer’s health fails then the State will be faced with an even larger bill to look after both the carer and the person for whom they are caring”

Care-giving should be classified as major public health concern, the Carers Association has said. The lobby group was reacting to a study which finds that up to 15 per cent of carers of children with special behavioural needs are depressed. It also finds that fewer than half of them are treated for their depression.

The study, from the Centre for Social Issues at the University of Limerick, draws on data from the Growing Up in Ireland study. Researchers Stephen Gallagher and Ailish Hannigan looked at the data on 8,500 carers raising children with such disorders as autism, dyspraxia and attention deficit hyperactivity disorder. They found a 10 per cent increased prevalence of clinical depression among these parents compared with parents of typically developing children.

Spokeswoman for the Carers Association Catherine Cox said that given the impact of caring on care-givers, it should be classified as a “major public health concern”.

“We would support the call to classify care-giving as a major public health concern as we are at the coal face on a daily basis and see first hand the strain that our members are under.

“It is worrying but not surprising to note that while parents are suffering from depression, many are not receiving the treatment they require.

“This may be because of financial difficulties preventing them from attending a GP if they don’t have a medical card,” Ms Cox added, “or simply because they feel guilty that they have to seek help as there is still stigma attached to mental health issues.”

The research report found the high levels of depression among these carers was due in part to difficulties managing these children with at-times severe behavioural difficulties and difficulties, with the health and well-being of the children taking precedence over their own well-being.

Ms Cox said exacerbating stress levels among these parents were Government cuts to their supports. “We have seen families recently losing home support for their children, which is putting tremendous pressure and stress on already stressed parents and families,” she added.

“We point out also that if the carer’s health fails then the State will be faced with an even larger bill to look after both the carer and the person for whom they are caring.

“It is in everyone’s best interest to care for the carer and put in place systems that consider the carer’s mental and physical health needs as a priority.”

It was vital that interventions were found to ensure depression was treated among these parents.

“These parents are constantly fighting for their children’s rights,” Ms Cox said, “from fighting for a diagnosis to fighting for early intervention, right through to primary and secondary school assistance. Once their child reaches 18 they have to fight for after-school services and daycare centre support.”