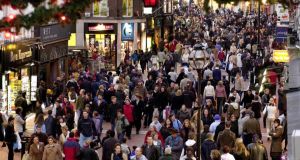 Shoppers on Dublin’s Grafton street. “Instead of viewing the affluent as a problem, the novel approach of the Millennium Consumption Goals would persuade them to contribute to the solution without having to reduce their quality of life,” Prof Mohan Munasinghe, the Sri Lankan scientist who shared the 2007 Nobel Peace Prize, told a conference in Dublin yesterday. Photograph: Eric Luke

Establishing consumption targets to motivate the world’s rich to consume more sustainably will reduce the burden on natural resources and help address poverty, the Sri Lankan scientist who shared the 2007 Nobel Peace Prize as vice-chair of the Intergovernmental Panel on Climate Change (IPCC) said in Dublin yesterday.

Prof Mohan Munasinghe is an advocate of the so-called Millennium Consumption Goals (MCGs) which seek to complement the Millennium Development Goals (MDGs) aimed at alleviating poverty. “Unsustainable patterns of consumption and production are important drivers of the issues threatening the future of humanity,” Prof Munasinghe said.

“The global economy driven by consumption already uses natural resources equivalent to almost 1.5 [times those of planet Earth], with the world’s richest 1.4 billion consuming almost 85 per cent of global output, which is over 60-fold the consumption of the poorest 1.4 billion.”

The MCG concept, which involves a set of benchmarks for consumers and governments of more affluent countries, was proposed formally in early 2011 during preparations for the United Nations Conference on Sustainable Development, or Rio+20 Earth Summit, in Brazil.

“The consumption of the rich is not only ecologically unsustainable, but also ‘crowding out’ the prospects of the poor and exacerbating inequalities that increase the risk of conflict and global unrest,” Prof Munasinghe told delegates at a conference to mark the 40th anniversary of the founding of Irish aid agency Trócaire. “Instead of viewing the affluent as a problem, the novel approach of the MCGs would persuade them to contribute to the solution without having to reduce their quality of life.”

He said the idea had already been put into practice by “communities, organisations, firms, cities, regions and nations” across the globe.

Trócaire director Justin Kilcullen noted the failure to reach targets outlined in the MDGs by 2015. “Despite the disappointments of the failure to reach global targets in eradicating poverty, due largely to the lack of political will by the wealthy nations to introduce much-needed reform of global structures, significant progress has been made in lifting hundreds of millions of people out of poverty,” he said.

“Where the circumstances have been created to favour development initiatives – investment in education and healthcare, the growth of democracy, the participation of citizens - the development indicators have improved significantly. Brazil, the Philippines and Ghana are examples of such countries.”

Also addressing the conference, Tánaiste and Minister for Foreign Affairs and Trade Eamon Gilmore said that whatever global development initiative will succeed the MDGs after 2015 should strengthen the role of civil society. Public consultations on the review of the White Paper on Irish Aid last year showed a strong interest in this area. “In the submissions we received, the issue of human rights and a strong civil society was a common theme.”

The review has resulted in a new policy for international development which is currently being approved by the Government. Mr Gilmore said he hoped to launch this with Taoiseach Enda Kenny in the coming weeks.