Businessman ’will challenge’ publication of names on insolvency register 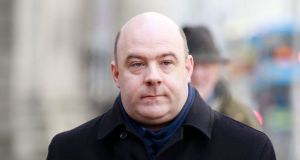 The businessman who took legal action in an attempt to halt the State’s decision to pay promissory notes to the banks has said he will challenge the plans to ‘name and shame’ individuals under new insolvency legislation.

David Hall of the Irish Mortgage Holders Organisation said he had “hundreds” of clients, many of whom would be prepared to challenge the proposed publication of their names on any of the four planned registers.

He said if the issue was not resolved “by agreement” in advance of the publication of names on the registers, he would seek judicial review of the legislation on behalf of affected clients.

Mr Hall said he had also made a complaint to the Data Protection Commissioner.

He said there had been “distraction” around the new expenditure guidelines outlined by the Insolvency Service of Ireland. But there were “architectural problems” with the new legislation surrounding “dignity, privacy and someone’s future”.

Under the Personal Insolvency Act 2012, four registers will be created and individuals will be listed according to the type of insolvency arrangement they enter into. One of the registers, however, will list those individuals who have merely applied to enter the process even if they have not yet finalised an agreement on their debts.

Mr Hall noted there was a provision in the law for people to come off the register of debt relief certificates after they had “served their sentence”. This raised the question of whether it was intended that people should not ever be removed from any of the other registers.

“It’s not humanly possible for you to come off any of the other three registers and that has been admitted by the Insolvency Service.” The service had recommended to the Minister for Finance that this be changed.

He said the proposed system amounted “naming and shaming” those who reached agreement on clearing their debts.

“Where the last bit of dignity that anybody might have has been put through the ringer, they now want the names to be publicly accessible online for anyone to see.

“It’s going to damage and crucify people for life. How can you ever return to normality when your name is up in lights like Las Vegas?”

“There is an opportunity there for this to be corrected by agreement. Failing that, a formal view will be sought from the courts to determine whether this is in breach of any of the respective acts and basic, fundamental human rights,” Mr Hall said.

Mr Hall said he had complained to the Data Protection Commissioner. It is understood the commissioner’s office has just today received such a complaint in relation to the registers.

“People need to know ahead of engaging in this process whether their rights are being trampled on here,” Mr Hall said.

The commissioner’s office confirmed it was consulted during June 2012 in relation to a draft of the Insolvency Bill.

It met with the Insolvency Service of Ireland in January this year “to discuss general data protection queries, which it had, associated with data collection and storage”, a spokeswoman said.

“We recognise that the debt resolution process provided for in the law involves extensive processing of personal data, including availability of such information in public registers.”

Separately, Mr Hall has asked the Supreme Court for an early hearing of his appeal against a finding that he does not have the required legal standing to challenge the State making payments to financial institutions via promissory notes without Dáil approval. Some €1 billion has been paid to date.

Concerns have also been raised by data protection experts about the legality of certain provisions in the insolvency legislation, which purport to exclude the right of access to personal information held by the Insolvency Service in certain circumstances.

Data protection consultant Daragh O’Brien of Castlebridge Associates said the right of access to one’s personal information under section 4 of the Data Protection Act was a “fundamental right”.

“The Data Protection Acts allow for restriction on disclosure where a criminal offence is being investigated. It is important that subject access requests are only withheld in the context only of suspected offences under the Insolvency Act and not in the context of general complaints or queries.”

Mr O’Brien said controls needed to be put in place for how people accessed data on the registers. He said making certain personal information publicly available and searchable online was also an invitation to attempted identity theft.

He questioned what training would be given in data protection issues to registered personal insolvency practitioners under the new legislation.

Barrister Fergal Crehan noted that under the insolvency arrangements in place in England, individuals were removed from the register three months after they had exited their arrangement.

Mr Crehan said it was “reasonable” that anyone should be able to inspect such a register “in so far as anyone could be a creditor”.

“What I think is unreasonable is that you seem to be on this register for life, long after you have exited the bankruptcy procedure or the voluntary arrangement. That, to me, goes far beyond what is necessary.”

Mr Crehan said he believed the legislation was in line with the provisions of the Data Protection Act with regard to the necessary processing of information in order to comply with a legal obligation.

But he did not think it respected either the relevant EU directive or the EU Charter of Fundamental Rights by which all EU states and institutions were bound.