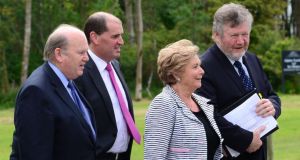 A Government blueprint on investment in childcare proposes that all working parents could receive State subsidies for children up to the age of 12 in crèches or afterschool care.

It is one of a number of options in a 125-page report aimed at increasing the affordability, quality and supply of early years and school-age care and education services.

Among the other key options in the report include:

* Capping the cost of childcare for working parents at €4.50 an hour and at lower rates for those on low incomes

The cost and quality of childcare has emerged as a major political issue with latest figures showing crèche fees in Ireland are among the most expensive in Europe.

Many of the proposals and options in the Government report, however, are highly expensive and would take a number of years to out into place.

The report emphasises that it is a “discussion document” and considerable additional work would be needed to implement the proposals.

Notably, the report does not propose tax relief for childcare, which is used in many countries to curtail the cost of care.

The group said there were serious concerns over the cost of tax relief and whether it was effective in supporting affordability, labour market activation and economic growth.

Instead, the report focuses on subsidising childcare fees for working parents and capping fees for those on middle or higher incomes.

In general, the subvention would be available to parents for up to 40 hours per week, less the time spent in school or the free pre-school year.

For example, during the school year a parent would receive 20 hours a week of subsidised care for child, rising to 40 hours outside school term.

The report estimates the overall cost to the State of this proposal alone would be in the region of €208 million.

The most expensive proposal is to extend paid parental leave by a further six months, which the group estimates would cost about €273 million annually.

Under this measure, the second six-month period of parental leave could be taken by either parent.

The report notes that any moves to extend paid parental leave should increase incrementally over time and as resources allow.