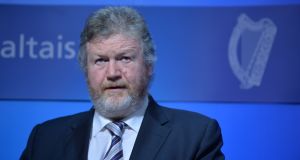 A new Bill setting out amendments to adoption law has been published by the Government which will give legal effect to the children’s referendum proposal.

Minister for Children and Youth Affairs James Reilly on Thursday announced the publication of the Adoption (Amendment) Bill 2016.

It provides for several scenarios, including changes to rules around the adoption of a child by a step-parent and providing eligibility for couples who are civil partners or who cohabitate.

It allows adoption irrespective of marital status in circumstances where both parents have placed the child for adoption and consent to do so.

It also changes the criteria under which the High Court may, in a case of “parental failure”, make an order authorising the adoption of a child without parental consent.

A statement from the department said “the best interests of the child [will] be the paramount consideration in relation to any adoption proceedings”.

“In that regard the views of the child [will] be ascertained by the Adoption Authority or by the court and for those views to be given due weight, having regard to the age and maturity of the child,” it said.

Welcoming the Bill, Dr Reilly said: “Adoption is not always the solution for children, but it is important to ensure that it is open to children where it is in their best interests.”

“The Bill provides for the remaining legal changes to ensure that children growing up in lesbian and gay headed families can have the same access to legal certainty and security as children in other family types,” said Glen co-chair, Kieran Rose.

Barnardos head of advocacy June Tinsley described it as a crucial piece of law “and a further sign that we as a nation are prioritising children’s rights”.

The Children’s Rights Alliance said adoption provides security to children and families and laws had been out of step with modern life for too long.

1 DUP pleads with UK to reduce salary threshold for migrant workers coming to North
2 A Russian cruiser with ‘cannibal rats’: What other ‘ghost ships’ could be out there?
3 ‘If all the immigrants go back, who will work in the meat factories and do the crap jobs?’
4 Jewish council dismayed at Sinn Féin TD’s ‘unacceptable’ tweets
5 Gardaí investigating four-lane motorway sulky race
Real news has value SUBSCRIBE