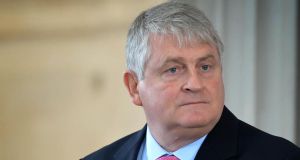 Denis O Brien: Mr Clinton thanked Mr O’Brien personally “for the invitation” to what was the latest in a series of charity platforms they have shared

Bill Clinton’s third speaking engagement in Ireland in as many years was facilitated largely by his friend and fellow philanthropist Denis O’Brien.

The billionaire chairman of the Digicel telecoms group helped to cover the cost of the visit along with a number of other private donors.

Opening his speech, Mr Clinton thanked Mr O’Brien personally “for the invitation” to what was the latest in a series of charity platforms they have shared.

There was no upfront fee for the 250 guests at last night’s dinner at the Conrad Hotel in Dublin but everyone in attendance was asked to pledge support to the One Percent Difference campaign.

The average speaking fee for Mr Clinton last year was close to $200,000 (€148,000), although he has charged a multiple of this at some corporate functions, accounts filed in the US show.

A CNN analysis showed last year was his most profitable on the lecture circuit when he earned $17 million from delivering 73 speeches.

He is the only former president who has to reveal speaking fees by virtue of the fact that his wife is in politics and is subject to family financial disclosure requirements.

Last year Mr Clinton visited Ireland to deliver the keynote address at the annual conference in Cork of the Worldwide Ireland Funds, whose directors include Sir Anthony O’Reilly and Loretta Brennan Glucksman.

In 2011, Mr Clinton flew to Ireland on Mr O’Brien’s private jet to attend the Global Irish Economic Forum in Dublin Castle, which was hosted by Taoiseach Enda Kenny.

Mr Clinton and Mr O’Brien formed a close working relationship in Haiti where the former acted as UN special envoy, and where Digicel has become the country’s largest foreign investor ever – pumping $600 million (€443 million) into an economy devastated by the 2010 earthquake.

Mr Clinton has written in praise of Mr O’Brien’s charitable work in Time magazine and last year he named the Irish businessman a Clinton Global Citizen under an awards scheme linked to the former president’s think tank the Clinton Global Initiative.