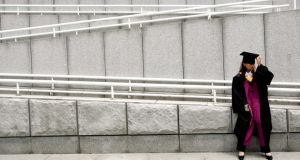 Minister for Education Jan O’Sullivan said she is determined asylum-seeking students who have been in the system for five years or more should be treated in the same way as Irish students. File photograph: Jason Lee/Reuters

Young asylum-seekers will be entitled to access third level education in the same way as Irish students under proposals being drawn up by the Government.

As a result, many teenagers who have completed their Leaving Cert over recent years have not been able to progress on to college.

Minister for Education Jan O’Sullivan said on Wednesday she is determined that asylum-seeking students who have been in the system for five years or more should be treated in the same way as Irish students.

Speaking at the Teachers’ Union of Ireland (TUI) congress in Wexford, Ms O’Sullivan said the high fees faced by asylum-seeking students effectively excluded them for a “future they have worked hard to achieve”.

“I am determined this will change from September 2015 for students who have spent five years or more in the Irish education system.

“I believe that such students should no longer have to pay any more to access third-level, than their Irish friends do, and that they should be have appropriate access to student supports.”

A working group established by the Government last year to review the asylum system is expected to propose these measures when its deliberations are published shortly.

In all, there are more than 4,000 asylum seekers living in 34 direct provision accommodation centres across the State. Just over 140 of these asylum seekers are aged between 13 and 17 years.

Campaigners have long criticised the restrictions on access to third level, insisting it is resulting in individuals becoming deskilled and unmotivated.

A number of other proposals are likely to be announced in the coming weeks aimed at reforming the asylum system.

A new “fast track” system for asylum seekers in direct provision for more than five years, which would see their cases dealt with within six months, is set to be announced by the Government.

The measures to deal with the asylum system are also likely to include increased cash allowances for those in direction provision.

Both moves are under consideration by an independent group assessing improvements to supports for asylum seekers, including the direct provision system.

The group was established by Minister for Justice Frances Fitzgerald and Minister of State in the Department of Justice Aodhán Ó Riordáin, and its report is expected to be published next month.