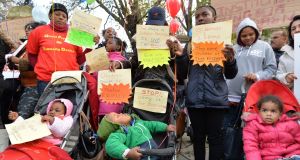 Migrants to Ireland living in the Direct Provision system marching on the Dáil in protest at the speed of the asylum seeking process in 2014. File photograph: Alan Betson/The Irish Times

Asylum seekers at a Direct Provision centre where a young mother took her own life last month have called on the Government to speed up the asylum process and to allow those in Direct Provision to work and attend educational institutions.

About 50 residents at the Kinsale Road Accommodation Centre in Cork staged a protest on the Grand Parade in Cork city centre today to highlight their plight and that of some 250 other residents at the centre where a Korean asylum seeker took her own life last month.

Kinsale Road Accommodation Centre Action Committee secretary Asad Mahmud said many of those at the Kinsale Road centre, including the woman who took her own life, had been waiting for several years to have their applications decided.

“The tragedy has affected all of us in different ways - the women are scared, the children are scared and the men are reacting in this way by raising their voices in protest so that the authorities will do something about it,” said Mr Mahmud, originally from Pakistan.

“We think this lengthy asylum procedure triggered this woman’s death because the way her application was handled by the system made it worse for her,” said Mr Mahmud, who said the group was also seeking an end to deportations.

Among those supporting the protest was Rev Ted Ardis of St Fin Barre’s Church of Ireland Parish, who explained that among those living at the Kinsale Road centre were a number of his parishioners including several families.

“These are people who are active in their community as much as they are allowed to be - these are intelligent and hardworking people who could make a contribution to our community as we have seen from their church activities - they have so much to give but they are not allowed,” he said.