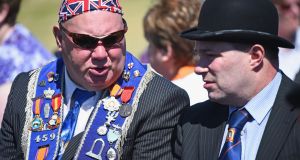 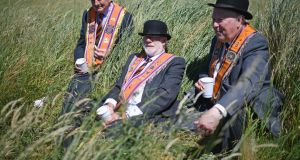 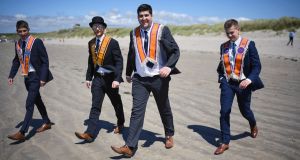 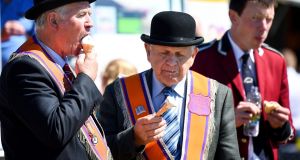 She was with family members and friends among the 10,000 crowd, as 50 Orange bands from across the North and the Border area took part in the pre-Twelfth of July parade at Rossnowlagh, Co Donegal.

Rossnowlagh, where the Orange Order parades every year, is a 40-minute drive from Ms Foster’s Co Fermanagh home.

She was in time to hear some of her own views on stalled talks with Sinn Féin reflected in the main speech of the afternoon.

Stuart Brooker, Assistant Grand Master of the Orange Lodge of Ireland, spoke of reaching out to the wider community, and particularly nationalists.

“We have done so in a spirit of openness and goodwill,” he said.

“It’s a pity that we don’t see that same tolerance and respect reciprocated by others. It is something we cannot understand.”

Among marchers on parade were Orangemen from Convoy, Co Donegal, where a foundation stone was laid last week for a new hall to replace one burned three years ago.

As the parade disbanded on sand-dunes, Orangemen wearing their sashes walked across the nearby beach, mingling with day-trippers learning to surf from four surf schools in the area.