Archbishop admits some in church may be homophobic 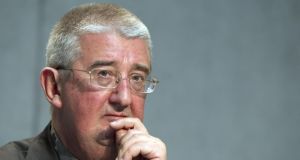 Dublin archbishop Diarmuid Martin said the same-sex marriage debate in Ireland had got off to ‘a bad start’.

Speaking on the RTÉ’s This Week programme today, he said the same-sex marriage debate in Ireland had got off to “a bad start”.

Defending church teaching that marriage should be between heterosexuals only, Archbishop Martin said “the church cannot impose (its teaching)” but it had a right to its’ say.

There was, he said “something special about the relationship between a man and a woman” and that marriage was “only about heterosexual union.”

He agreed with performer Rory O’Neill (Panti Bliss) that there was a ‘homophobe’ in all of us and recalled jokes about gays and travellers growing up. “We have to grow out of it,” he said.

He also said that in general it was “the person offended who defines the word” (causing the offence). “People in the church can be (homophobic),” he said and that “church teaching can be used in a homophobic way” but “all will have to cleanse” it of that.

Earlier Mr O’Neill said he wanted an apology from RTÉ over its handling of the controversy that followed comments he made on The Saturday Night Show.

apology read by the host of the Saturday Night Show Brendan O’Connor the week after O’Neill appeared on the show.

“What they made Brendan say was that ‘it is nothing to do with us . . . our guest said it, and our views are not our guests’,” O’Neill said.

In the statement, the presenter apologised for any “upset or distress caused to individuals named or identified” following comments made by his guest, Rory O’Neill, about homophobia in Irish society.

O’Neill added RTÉ appeared to be blaming him for the comments when in fact he was responding to a direct question from the presenter.

“The suggestion was that I am a risky guest and that I cannot be trusted and that I went off and started defaming people.”

O’Neill also said public opinion towards him had changed after it emerged that RTÉ had made a settlement of €85,000 to two individuals and members of the Iona Institute who claimed they had been defamed on the show.

He said the first few weeks after he appeared on the show were “difficult and unpleasant” but said since his speech to the Abbey and the details of the settlement “the tone has changed”.

O’Neill said he decided to make his Noble Call speech in the Abbey because he felt the debate was being taken out of his hands.

“I was being talking a lot about but I wasn’t getting a chance to tell my side of the story. He thought only a few hundred people would see it but a video of the speech has been viewed more than 400,000 times.

He admitted that the timing on a Saturday evening appealed to him as he would be on stage at the Abbey at “the exact same time that the Saturday Night Show was having their debate on homophobia”.

“I’d been invited to attend but I didn’t really feel that I wanted to be in a sort of debate where there’s going to be a lot of heat and not so much light generated,” he said.

The publicity generated by the homophobia debate and his Abbey speech has heightened interest in his stage show Panti Bliss and also prompted approaches from two political parties. He declined to name the parties.

O’Neill said he had been asked to consider running in the local and European elections but ruled this out, saying he was a good talker and enjoyed a bit of righteous anger but was no good at sitting in meetings. “I’m not cut out to be a politician . . . I am much better as a provocateur, rousing the masses”.

He also questioned the prominence given by the mainstream media, including The Irish Times, to the Iona Institute. “They are a small group.”

O’Neill said the debate on whether gay people should be treated equally in every way was now redundant and that this argument had been won.

“Hearts and minds is another matter . . . but the law should treat us [GAY PEOPLE]in every way equally.”