Speakers criticise Amnesty Ireland for its campaign to review law 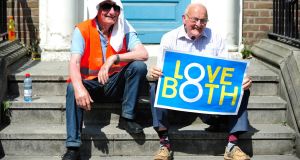 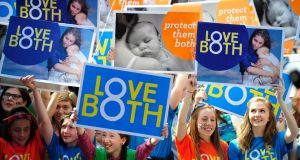 Thousands attended an anti-abortion rally in Dublin on Saturday which encouraged people to ‘Celebrate the 8th’ Amendment of the Constitution which provides equal rights to the unborn child and the mother.

The rally was organised by the Pro Life Campaign, and speakers told the crowds gathered on Molesworth Street outside Dáil Éireann to resist calls to have the 8th Amendment of the Constitution dismantled.

“There are tens of thousands of people alive today because of the 8th Amendment, Ireland’s right to life amendment. These stories of hope and survival simply cannot be ignored in the debate. They deserve to be front and centre,” said Pro Life Campaign deputy chairperson Cora Sherlock.

Speakers also criticised Amnesty Ireland for its campaign to review the State’s legislation on abortion, and Ms Sherlock said the pressure to do so is “coming from the top down, not from the grassroots up”.

Also present was Melissa Ohden from the US, who survived a failed abortion and now campaigns on a vigorous anti-abortion platform.

“I think it is an awful tragedy that groups like Amnesty Ireland openly campaign for abortion,” she said.

“You have every reason to be proud of the 8th Amendment. Passing this provision in 1983 was a hugely positive step forward for authentic human rights. As an abortion survivor, I applaud your country for it.”

There were also appearances by Sinead McBreen, a Cavan mother who has previously described pressure she came under to abort her daughter following a medical misdiagnosis, and Mary Kenny from Limerick. “In my second year at university I found out I was pregnant and it saddens me now to say the first thought to cross my mind was abortion,” said Ms Kenny, who was talked out of taking this course of action by her friends and eventually gave birth to her daughter.