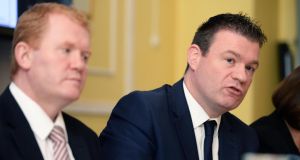 Minister of State Paudie Coffey and Minister for the Environment Alan Kelly at the launch of the Social Housing Strategy 2020. Photograph: Eric Luke

The most important thing a society can do for its citizens is to provide them with housing, according to Minister for the Environment Alan Kelly.

At the publication of his long-awaited social housing strategy, he said: “Through what we are announcing today we are demonstrating that we see [housing provision] as being critical for society and critical for Ireland. To be frank, I am unlikely to have a more important day in my time in this office in the Department of Environment.”

The housing challenge facing the Minister is daunting: more than 3,000 people in emergency accommodation across the State, a record number of people sleeping rough in Dublin, rents rising to unaffordable levels for low- income households and 90,000 on the social housing waiting list. The Minister’s strategy is intended to accommodate everyone on it by 2020.

It is an ambitious initiative which, if implemented, would see the State return to a role in housing provision it turned its back on in 2007. But it is short on detail, with unclear numbers, and is devoid of answers for those in most acute need.

By 2020, it says, it will meet the housing needs of 110,000 households. Leaving aside the fact that more than 90,000 households are in need of social housing, any impression that all those on the list are going to be accommodated in social housing would be misguided. Of the 110,000 homes promised in the strategy, 75,000 will be in the private rented sector.

The Hap system will bring improvements, for example allowing the tenant to take up employment without losing the payment. However, it is clear this aspect of the strategy amounts to a relabelling of households rather than any fundamental change to their housing situation. They are not getting a council house, with the security that brings, but will remain in the insecure private rented market.

The strategy promises to “provide 35,000 new social housing units”. This is vague. We do not know how many new local authority homes will be built. The target is to be reached through a combination of voluntary housing building, leasing arrangements with private landlords and Nama and refurbishment of unused local-authority homes as well as acquisition of units and some new building.

For example, the strategy says 3,000 units will be provided next year from current spending – mainly leasing arrangements. A total of 2,386 units will come from capital spending – refurbishments, new builds and acquisitions. These are ambitious targets, with tight timelines. Whether local authorities can crank up to meet their targets next year remains to be seen. Delays will see targets missed.

Those experiencing the most acute form of housing distress – the homeless, who include almost 800 children nationally and 680 children in Dublin – will see no light in this strategy.

Rent controls as recommended recently by the National Economic and Social Council and an increase in rent caps as demanded by groups working with the homeless are absent from the policy. This is, however, intended as a medium-term housing strategy which if fully implemented would contribute significantly to increasing social and affordable housing supply.

Simon Brooke, head of policy with the housing association Clúid, said: “This strategy would be a start but only a start. If we are serious about providing every citizen with housing we will need not just a six-year plan but a 20-year plan.”