Agencies say protocols must be issued to counsellors 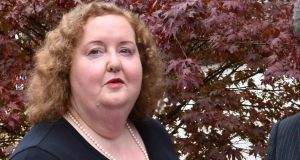 Alison Begas, chief executive officer at the Dublin Well Woman Centre: says there is a “lot of uncertainty” as to how the Department of Health expects crisis pregnancy counsellors to refer suicidal women

Clear protocols must be issued urgently to crisis pregnancy counsellors on how they should deal with suicidal pregnant women under new legislation enacted last year, agencies working in the sector have said. Without these a woman in crisis could fail to get appropriate services in time and take her own life, they warn.

They were responding to reports that the young woman who this month had an unwanted pregnancy delivered by Caesarean section had not been referred to a psychiatrist under the terms of new abortion legislation until she was in her second trimester. She was suicidal and had been attending a crisis pregnancy agency but did not see a psychiatrist until a friend advised her to see a GP, who referred her on to psychiatry services when she was 24 weeks pregnant.

There have also been calls on the HSE to “fully support” crisis pregnancy counsellors, with one saying media “stings” on some by anti-abortion campaigners in recent years had had a “chilling effect” on their work.

Alison Begas, chief executive officer at the Dublin Well Woman Centre, said there was a “lot of uncertainty” as to how the Department of Health expected crisis pregnancy counsellors to refer suicidal women. She said Well Woman was looking at how it could “increase further” the supports it gives to pregnant women who were expressing suicidality.

“It is clear we will have to see if there are ways we can increase further our supports,” she said, but added it was not clear how women in such situations could be referred on from a crisis pregnancy NGO to services provided under the new abortion legislation.

It was “amazing” that eight months after the commencement of the Protection of Life During Pregnancy Act 2013, the department had yet to formally publish guidelines for medical practitioners on implementing the Act, she said.

These are expected shortly, says the department. Although yet to be published they have been widely leaked. They say women may present “to a variety of care providers such as crisis pregnancy services . . . Such services can either refer the woman to her GP or advise the woman to present as an emergency at a hospital where appropriate.”

Niall Behan, chief executive of the Irish Family Planning Association, said such an instruction made a lot of assumptions, including that the woman in crisis has a GP and that she has sufficient English to be able to communicate with a GP. “This just isn’t good enough. From the Constitution down, this legislation, the guidelines, none of them adequately address the real challenges faced by real women in crisis.”

“Media stings in recent years, where counsellors were put under enormous pressure by bogus clients to tell them to say they had had a miscarriage at post-abortion medical check-ups – that knocked the confidence of a lot of people in crisis pregnancy counselling.”

Mr Behan said many counsellors felt “they have to be so careful in everything they say. They can feel they can’t always know who they’re talking to.”

He said they also had to be careful not to be seen to advocate for one option over another. For instance, while there were organisations in Britain known to help poor women with the cost of abortion, agencies could not contact these on behalf of women, even those women with language barriers.