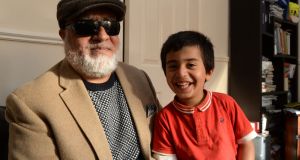 Kabir Chakari with his son, Ahmad Zuhair, at his home in Clondalkin. Photograph: Cyril Byrne

A rocket smashed into Sultan Kabir Chakari’s home in Kabul, killing some of his neighbours and leaving him for dead in the rubble. The explosion robbed him of his eyesight and left him with other serious injuries.

Fleeing Afghanistan to Iran in 2004, he eventually found his way through Europe guided by a trafficker. Blind and unable to speak English, he was never sure exactly where he was.

Worst of all, Chakari recalls more than a decade later, it would be years before he found out what happened his family.

Sitting in his living room in a west Dublin suburb, wearing a heavy wool coat and a pair of sunglasses on a stuffy summer’s day, Chakari doesn’t like to dwell on the demonstration he took part in at St Patrick’s Cathedral in 2006. Like the others who occupied the church, refusing food and water in the misguided hope their asylum applications would be accepted, Chakari saw the protest as a desperate, necessary action.

In all, about 40 Afghan men (nine were minors) entered the church on a Sunday and refused to leave. Some threatened suicide by hanging themselves from roof beams; some were taken to hospital, collapsing from dehydration.

The protest would last a week and spark a nationwide debate on the nature of the Irish asylum process, extending from the crowds outside all the way to the Dáil chamber. A decade on the debate lingers, with many believing the system remains badly in need of reform.

“There was no other way except the legal way. People can make a demonstration,” Chakari recalls of the protest through broken English.

They wanted the government to grant asylum or give an indication of how long the protracted process might take. “If you not do that we don’t know how long it will take. Years [are] gone already, how long more? They refuse it,” he said.

The protest began on Sunday, May 14th, 2006. The men, aged between 16 and 45, had discussed the plan and travelled from accommodation centres around Ireland.

At the time, spokesman Osman Hotak said they had been living for years as mental prisoners. “All of us will die unless we are allowed to stay. We are willing to end our life,” he said. The seriousness of their actions became clear.

They gathered on blankets in the north transept and waited for the Department of Justice to accept their demands. The situation quickly turned into a political debate as the crowds – some in support, some against – swelled outside. Inside, the men resolved to hold firm in the face of what they considered an unacceptable alternative – an indefinite return to asylum centre existence or, worse, home.

“I worked with the government before Taliban, after Taliban and with Taliban,” Chakari protested at the time. “I say no I am just a worker, working for government, for people, for my country, for my population. I am not working for one party.”

He knew he was in grave danger from the violent political schism gripping his country and he considered leaving. Then the rocket tore through his building.

“They wanted to kill me. They [thought] that I died, I am finished. I feel nothing [in] my legs, my eyes, my hands, my neck,” he said.

After blindly travelling across Europe, he recalls the day he arrived in Dublin Airport, being led into an office.

“The interpreter said it’s okay, now you are in Dublin, in Ireland. You are safe, you don’t think about anyone, you don’t be afraid, you are in a safe country. After that I feel, okay now [I am] in a safe place.”

Chakari initially settled at the Balseskin Reception Centre in Dublin before being transferred to Cork. He remembers the conditions warmly but it wasn’t long before a new struggle began.

“That time was a tough life for me. I had very big problems, a lot of stress about my life, my future, my family, their future, their life,” he said. He struggled with diabetes and cholesterol problems, he says, and had no way to contact his family.

“The centre was very difficult because it’s not one type of people. It’s more than 60 countries, 60 cultures; different people: good people, bad people,” he said. “You don’t know the future, if you go back to your country your life is in danger. You don’t know about your family. For a long time I had no news about them, where they live.”

It was the prolonged uncertainty and stress that motivated many of the other asylum seekers at St Patrick’s Cathedral. Osman Hotak told reporters: “When you cannot have your rights in an office, the church is the best place to come.”

His comment encapsulated the debate – whether the occupation of a church was acceptable and what, exactly, were their “rights”.

The political response came fast and unequivocally. Taoiseach Bertie Ahern said the government would not give into threats; concession would lead to copycat protests.

Justice minister Michael McDowell (who did not respond to requests for an interview for this article) was equally staunch. He said: “No favours or exceptions will be done for anyone who seeks to thwart the system by actions of this kind.”

On day two of the occupation, the Green Party, Labour and Sinn Féin all gave the demonstrators their support and urged Mr McDowell to take action. Then a TD, Michael D Higgins spent three hours in the church, appealing to the men to cease their fast with an offer to pursue their cases personally.

Former Socialist TD Joe Higgins also visited the cathedral and raised the issue in the Dáil.

“People were left languishing for years in [asylum] centres. That was then and things haven’t changed in that regard . . . All of the reports that have been made show clearly that direct provision is a prison for a lot of people.”

Tentative efforts by the Church of Ireland to resolve the crisis came to nothing.

“I think we felt helpless really that we couldn’t do anything really significant for them. We certainly didn’t feel angry because we very much sympathised with their plight,” says now retired Dean of St Patrick’s Robert MacCarthy, although he was not personally involved in the attempted resolution.

“In spite of all the attempts made for a happy [resolution] we ended up having to ask the guards to remove them. Really looking back on it that’s probably what should have happened in the beginning.”

But as with Joe Higgins, Mr MacCarthy laments the lack of progress on the asylum system and the broader issue of refugees in Ireland today.

“The treatment of immigrants has actually been disgraceful. The fact that they have been kept for not just months but several years in this holding station reflects very badly on Ireland I think,” he says.

“There is an enormous populism taking over this State. And unless it can actually be shown to benefit the government in the ballot box nobody is interested in doing it, is my impression. That’s why asylum seekers are off the agenda, because they don’t vote.”

Chakari was granted permission to remain in Ireland after five years in the system and went on to obtain citizenship. All the others involved in the protest are believed to have stayed too. Chakari eventually found his family who had fled to safety in Pakistan and they reunited in Ireland in 2011.

Their years of separation were a source of great pain. Chakari’s youngest son Ahmad Zuhair was born in Cork. He was named after the family’s eldest who had long been assumed dead in Afghanistan before eventually emerging from one of its prisons. Today he remains in the country and is very ill.

Chakari believes immigrants represent an important part of Irish society. Still suffering the effects of his wounds, he spends his time learning computers, English and braille at a local community centre.

“I am very, very happy. My family came here and they helped me a lot,” he says. He talks about guiding his children which, through limited English, seems to refer to his ability, finally, to raise his family.

“Now I am Irish, my children are all Irish. They go to school and college,” he says. “I look after the education and behaviour because they are the future.”