A year since the death of Savita Halappanavar 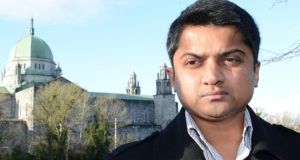 Sunday 21st October 2012: Savita Halappanavar (31), who is 17 weeks’ pregnant, has been experiencing severe back-pain overnight at home in Roscam, Galway. Her husband Praveen brings her to St Monica’s ward, the maternity ward, at Galway University Hospital where she is found to be miscarrying. She is admitted and the plan is to “await events”.

Tuesday, 23rd October: 8.30 am, Savita asks Dr Astbury whether the pregnancy can be terminated, who tells her that Irish law will not permit termination as her life is not at risk. 11.30 am, Savita and her friend Mrdula Vaseali, ask midwife manager Ann Maria Burke if the pregnancy can be terminated. Ms Burke says it cannot, explaining, ‘It’s a Catholic thing’. Savita becomes very unwell overnight.

Wednesday, 24th October: Savita is in septic shock by morning. She delivers a still-born female that afternoon. She is transferred to the High Dependency Unit.

Thursday, 25th October: She is moved to ICU around 3 am. She does not regain consciousness.

Sunday, 28th October: Despite valiant efforts by ICU staff since her admission, at 1.09 am, Savita suffers cardiac arrest and dies

Wednesday, 14th November: News of Savita’s death is broken by The Irish Times. It makes headlines across the world.

Monday, 19th November: HSE announces inquiry into Savita’s death will be chaired by Professor Sir Sabaratnam Arulkumaran, Professor of Obstetrics at St George’s University, London. Praveen, who has just arrived back in Galway from India, objects to the inclusion of three members of staff from Galway University Hospital on the inquiry team. They are removed and replaced.

Friday, 23rd November: The Health, Information and Quality Authority (Hiqa) announces it will investigate the standards of care provided to patients. including pregnant women, at risk of clinical deterioration at UCHG, in light of Savita’s death.

April 8th: Inquest opens in Galway for full hearing. It will run over two weeks, hear from over 30 witnesses, including three expert witnesses.

June 13th: HSE publishes report, which finds multiples failures in the care of Savita. It finds there was an under-emphasis on the Savita’s deteriorating health and an overemphasis on her unviable foetus.

July 3rd: Praveen instructs his solicitor, Gerard O’Donnell, to issue medical negligence hearings against the HSE and the hospital