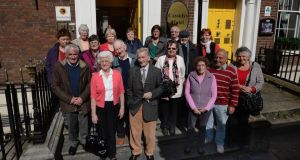 A group from the Irish Elderly Advice Network photographed at Cassidy’s Hotel Parnell Square after arriving in Dublin for the Gathering. Photograph: Brenda Fitzsimons


Some of them had left Ireland more than 50 years ago, but yesterday 32 emigrants returned from Britain to spend a week as tourists in their own country. It is a Gathering in the true sense of the word, far from the shakedown of wealthy tourists described by Gabriel Byrne earlier this year.

The Irish Elderly Advice Network in London organised the trip and its co-ordinator, Sally Mulready, said it had targeted people from rural Ireland who had never had the opportunity to see Dublin landmarks. They will meet President Michael D Higgins, Taoiseach Enda Kenny and visit such attractions as Kilmainham Gaol, Croke Park and Glasnevin Cemetery.

“Is Dublin ready for us?” said John O’Connor, who is originally from Mullinahone, Co Tipperary. He moved to England about 52 years ago “but Ireland will always be home”. He was particularly looking forward to seeing Áras an Uachtaráin and the Dáil “because the closest I’ve ever got was looking in from the outside”.

Michael Galvin (82), who is originally from Kerry, said he “couldn’t believe” he was going to visit the home of President Michael D Higgins, the Dáil and Croke Park.

Alice Kennedy, who is from Clonaslee, Co Laois, said she wouldn’t know Dublin at all. “We’d just pass through it on the way home. I’ve never been to the Áras so I’m looking forward to that. And I believe Enda [Kenny] is going to have a photo taken with us.” She is secretary of the London Irish Pensioners’ Choir and said there was a good chance she might break into song in the Dáil if she got any encouragement. “ In an Irish Country Home is my song,” she said.

While some of the group had fond memories of the land they left behind, others, like Phyllis Morgan, had been glad to leave. She was born to a single mother in the 1940s and spent most of her life in institutions until she was “chucked out” the day before her 16th birthday, “not prepared for life”.

She left Ireland at 18 and has never looked back. “Definitely England is my home. There was never a welcome for me in this country here,” she said.

She works with survivors of institutions and is accompanying some of them on the trip.

Some former residents of the Magdalene Laundries are also on the trip. “They are not coming as victims,” said Ms Mulready. “They are coming as Irish people in their own right. Since Enda Kenny’s apology to women who spent time in the Magdalene Laundries, they have found a new confidence and it’s time for them to see Dublin in a more positive light.”