67% support the introduction of same-sex marriage in Ireland 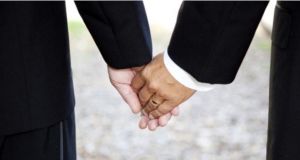 Support for the introduction of same-sex marriage has remained steady since last Spring, with an overwhelming majority still supporting the move, according to the latest Irish Times/Ipsos MRBI poll.

Asked how they will vote in the planned referendum on the issue next year, 67 per cent they would vote in favour, 20 per cent said No, with 9 per cent having no opinion and 3 per cent refusing to respond.

When undecided voters, or those who refused to respond, are excluded from the poll, the Yes figure rises to 77 per cent with 23 per cent on the No side. That is a marginal change since April when the figure was 76 per cent to 24 per cent, but it is considerably stronger than November, 2012, when it was 64 per cent Yes and 36 per cent No.

Supporters of Sinn Féin, Independents/others and the Labour Party are almost equally strong in their support for same sex marriage, but Fine Gael and Fianna Fáil supporters are significantly less enthusiastic.

In class terms there is almost equal support for same sex marriage across the spectrum. This contrasts with the widely different views across the social classes on economic issues. Farmers are the only group where support for the measure is significantly lower than the average.

However, there are very significant differences across the age groups, with younger people overwhelmingly in favour and the over 65s against the Constitutional change. Among those aged between 18 and 49 the majorities in favour of same sex marriage are in the high 70 per cent range. This drops to 61 per cent among the 50 to 64 age cohort and among the over 65s just 38 per cent are in favour while 46 per cent are against.

There is also a marked difference between the sexes with women more likely than men to say they will vote Yes.