100 years on, Irish feminists have plenty to be proud of

Opinion: The achievements of the 20th century were extraordinary, but today’s feminists have much to pursue 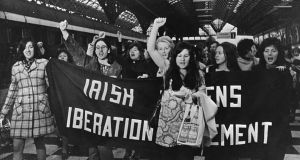 Women on the platfrom of Connolly Station, Dublin, in 1971, prior to boarding the Belfast train to travel to buy contraceptives, which were illegal in the Republic at the time. Photograph: The Irish Times

In 1913, 100 years ago, Irish feminists were poised between two momentous events: the passage of the Third Home Rule Bill through the UK parliament in 1912, without a much hoped-for provision for female suffrage, and the outbreak of the first World War, which would divert suffrage activities into pro- and anti-war campaigns.

In 1918, with the Representation of the People Act, the vote was granted to women over the age of 30 with a property qualification; full voting rights for all over 21 came in the Free State constitution of 1922.

The history of Irish first-wave feminism goes back to the 1860s and people like Isabella Tod and Anna Haslam who set up the first organisations seeking votes for women. They and others were also active in the struggle to achieve access to higher education for women, to give married women rights to their own property and to repeal the Contagious Diseases Acts, which allowed suspected prostitutes in certain areas to be compulsorily examined and treated for venereal disease. The careful reformist approach of this cohort of suffragists was slowly but surely effective in achieving its ends.

Frustration with the Irish Parliamentary Party – and the example of the Women’s Social and Political Union, the Pankhursts’ organisation – caused Hanna Sheehy Skeffington and Margaret Cousins to set up the Irish Women’s Franchise League (IWFL) in 1908, with a more militant approach. They broke windows in Government Buildings, and were intermittently imprisoned between 1912 and 1914.

Two British suffragettes, Gladys Evans and Mary Leigh, tried to blow up the Theatre Royal, and threw a hatchet into prime minister Asquith’s carriage, narrowly missing him. The IWFL did raise consciousness of the issue of suffrage to a new popular level, particularly through their newspaper, The Irish Citizen .

Repressive legislation
The achievement of the full franchise by women in 1922 did not mean a society which espoused equality. Successive Irish governments introduced repressive legislation in the 1920s and 1930s, including the effective removal of women from juries in 1927, the marriage bar in 1932 (under which women had to leave their jobs when they got married), the Conditions of Employment Act of 1935, which restricted women’s employment in certain areas, and of course, the privileging of women in the home in the 1937 Constitution. Groups like the Irish Housewives’ Association and the Irish Women Workers’ Union valiantly fought these attempts to restrict women to the domestic sphere, but it wasn’t until the second wave of feminism in the 1960s and 1970s that reformists and activists again combined to achieve some extraordinary changes.

The second wave had a large smorgasbord of issues to explore. They included the marriage bar, equal pay, childcare facilities, violence against women and a range of injustices broadly related to marriage and reproductive issues: contraception, divorce, single motherhood, deserted wives, same-sex rights and abortion (the last still with us and sadly, as divisive as ever).

Young women today are amazed at the idea that less than 40 years ago, women in the public sector and in many private companies had to resign their jobs on marriage; that women were regarded as dependents of their husbands for tax and social welfare purposes, and paid on average 57 per cent less than their male counterparts; that contraception and divorce were banned; that there were no State supports for single parents or deserted spouses; that sex education was non-existent in Irish schools; that the idea of a female Irish president was so unlikely as to be laughable. All of this was overturned in the 1970s and following decades.

Second-wave leaders
The people who played significant public roles in the second wave were, in the beginning, journalists like Nell McCafferty, Mary Maher, Mary Holland, Mary Kenny, Mary McCutcheon, Rosita Sweetman and June Levine, who has done the movement great service by writing Sisters; The Personal Story of an Irish Feminist , first published in 1982, and reprinted in 2012 near the first anniversary of her death. Sisters was not just the autobiography of a very interesting woman but the biography of the first decade of the Irish Women’s Liberation movement.

The broadcast media also played a large role in highlighting the hidden Ireland, with the tragic death of Ann Lovett in a grotto in Granard in 1984, unleashing a torrent of stories of suffering from women all over the country who had remained silent up to then. The work of Nuala O’Faoláin, Betty Purcell and others in Irish radio and television played a huge part in placing women’s issues in the foreground.

The achievements of that decade were extraordinary. We have a lot to be proud of, for a small country with a powerful patriarchal State and church. Last Saturday, the Countess Markievicz Summer School took place in a packed Liberty Hall, with many young women in the audience. The big ticket issues of the 21st century – domestic violence, reproductive rights, employment rights, childcare which is affordable and fair to parents and children, and the battle against viciously reductive female body images, sex trafficking and the incredibly wealthy pornography industry – will be theirs to pursue. They have many admirable predecessors.