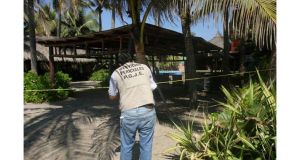 A police officer cordons off a crime scene at a beach hotel where six Spanish tourists were raped by armed men. Photograph: Jacobo Garcia/Reuters

Six Spanish tourists were raped by a gang of armed, masked men in the Mexican resort of Acapulco, the latest chapter of violence that has tarnished the once-glamorous resort.

The vicious, hours-long attack occurred before dawn on Monday at a house that six Spanish men, six Spanish women and a Mexican woman had rented on a quiet, idyllic stretch of beach on the outskirts of Acapulco.

The attackers gained access to the house because two of the Spaniards were in the yard and apparently were forced to open the door, Acapulco mayor Luis Walton told a news conference.

The five attackers burst into the house and held the group at gunpoint, he said.

They tied up the six men with phone cords and bathing suit straps and then raped the six Spanish women. The Mexican woman was not raped.

Guerrero state attorney general Martha Garzon said the Mexican woman begged the men not to rape her and the assailants told her they would spare her because she is Mexican.

"Fortunately we have strong evidence to lead us to those responsible for this reprehensible act," she told Radio Formula.

The attack began about two hours after midnight and the victims were only able to report the crime five hours later.

"This is a regrettable situation, and of course it is going to damage Acapulco," Mr Walton said.

The once-glittering resort that attracted movie stars and celebrities in the 1950s and 60s has already been battered by years of drug gang killings, but apart from very few incidents, the violence has not touched tourists.

Mr Walton said he believed, but was not sure, that the assailants in Monday's attack did not belong to a drug gang.

The Spanish embassy in Mexico City said the victims were receiving consular assistance.

The victims were "psychologically affected" by the attack and received treatment, the mayor said.

Spain’s foreign ministry had already issued a travellers advisory on its website for Acapulco before the attack, listing the resort as one of Mexico’s 'risk zones', though not the worst.

"In Acapulco, organised crime gangs have carried out violence, though up to now that has not affected tourists or the areas they visit," the advisory states. "At any rate, heightened caution is advised."

The attack came just three days after a pair of Mexican tourists returning from a beach east of Acapulco were shot at and slightly wounded by members of a masked rural self-defence squad that has set up roadblocks in areas north of Acapulco, to defend their communities against drug gang violence.

The vigilantes say the Mexican tourists failed to stop at their improvised roadblock.

The new attack was particularly embarrassing for Mexico, because it came just four days after tourism secretary Claudia Ruiz Massieu visited the International Tourism Fair held in Madrid to launch a 'promotional offensive' depicting Mexico as a safe and attractive destination.

"This is Mexico's moment," she said, describing it as "a safe country".

Acapulco was glorified in Frank Sinatra songs and Elvis movies, Elizabeth Taylor was married there, John F Kennedy and his wife Jackie came on their honeymoon, and Howard Hughes spent his later years hiding out in a suite at the Princess Hotel.

But beheadings and drug gang shootouts, some on the city’s main seaside boulevard, became more frequent after 2006, as gangs fought for control of the city’s drug and extortion business.