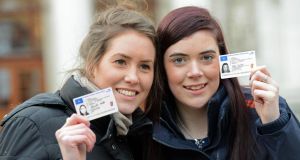 Daniela Reicke (left) Cork, and Aoife Murphy, Blarney, Co Cork, at the launch of the new credit-card sized driving licences last year. Engineers at Trinity College have found that young women are much better at learning from their driving mistakes than their male counterparts. Photograph: Eric Luke / The Irish Times

The cars used were all fitted with advanced “black box” technology that used Goggle Maps and GPS technology to track what the beginner drivers were doing. In particular it looked at speed, acceleration, cornering and braking, said Prof Ciarán Simms, director of teaching and learning in Trinity’s school of engineering.

The study racked up 13 weeks of driving data and this was later crunched by the team at Trinity, including Prof Bidisha Ghosh from the university’s civil engineering department.

Crash Services provided the hardware and software for the monitoring, said Martin McRandal, their telematics manager. Half the drivers were told the system was monitoring their driving, but they had no access to any of this information, he said.

The other half were able to log in to see how they performed and were given a green, amber or red light grading. It was also possible to link in Google street view so the drivers who committed serious mistakes could review what the location looked like to help them remember.

“I am not a psychologist, but when I saw the results they greatly surprised me,” Prof Simms said. But perhaps they were no surprise at all given young males typically have poor accident statistics, he added.

Unfortunately, the study did not attempt to solve the old questions over who is better reading maps or whether men really do have a better sense of direction. But the game is lost for men over the issue of learning from your mistakes.