When it comes to arthritis treatment, timing is of the essence 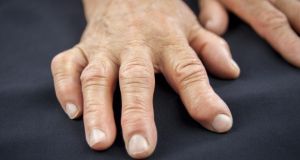 Rheumatoid arthritis: a disease that has a circadian rhythm. Photograph: Thinkstock

Timing the delivery of drug therapies to a patient’s natural body clock could help reduce pain in rheumatoid arthritis. And using what the researchers call chronotherapy might also be valuable in psychiatric conditions such as depression and ADHD.

Our bodies run to a 24-hour circadian rhythm. Many bodily functions switch on and off in a co-ordinated way to match this wake-sleep rhythm. It makes sense to try and link the administration of a drug therapy to the optimal time over this 24-hour cycle, says Dr Andrew Coogan, head of the department of psychology at Maynooth University.

His research group is studying chronotherapy. “We set out to write a review of chronotherapy across a spectrum of medical disciplines, but this soon got whittled down to rheumatology and, specifically, rheumatoid arthritis,” he says.

This kind of arthritis is an autoimmune disease where the body’s immune system attacks healthy joint tissues, triggering severe inflammation. This causes pain that can also lead to other downstream problems such as disturbed sleep and depression.

Rheumatoid arthritis is a disease that has a circadian rhythm: morning pain and joint stiffness is a “classic sign” of the condition, says Dr Coogan.

The best evidence the research team found for the value of chronotherapy was in relation to rheumatoid arthritis, they write in the journal Nature Reviews Rheumatology. “There is a rise at night of cytokines, the immune system substances that trigger inflammation,” he says.

They found good evidence in the literature that showed taking anti-inflammatory drugs such as steroids at night helped to reduce pain on waking. The same drugs were being used, but they were being administered with the person’s body clock in mind.

“Chronotherapy, or tailoring the timing of treatments to the body clock of patients can optimise results,” he says.

He and his collaborators viewed this as “particularly encouraging”, as night pain can lead to sleep disturbance and knock-on psychological effects such as depression and anxiety, he says.

“Pain, depression and sleep disturbances seem to be interconnected in rheumatoid arthritis. Understanding the impact of chronotherapy on all of these areas will allow us to derive clinically relevant conclusions and improve patient care.”

The team were surprised that chronotherapy wasn’t more widely studied, particularly given the lack of drugs to help these patients.

“There is a poor pipeline of drugs, but here is something simple we can do just by changing the timing of when the patient takes their drugs,” he says.

Given the lack of options, “we should be focusing on how to optimise the treatment options we have”, he says.

“It is also surprising that chronotherapy isn’t mentioned in official guidelines for conducting rheumatoid arthritis drug trials, but hopefully our research will have an influence on this.”

Circadian rhythms are known to be important in other conditions, including in the administration of chemotherapy drugs in cancer. Changing the timing of when drugs are given might improve their performance and also help to reduce side effects, he says.

“There is a lot of interesting evidence for chronotherapy in rheumatoid arthritis, but not enough. This needs further work to study how the drugs work, particularly in non-steroidal drug treatments,” says Dr Coogan.

It could have a big impact on people’s lives; about 40,000 people in Ireland have rheumatoid arthritis.