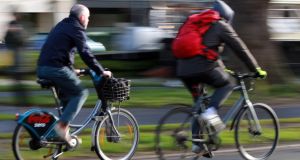 Ireland is grossly underinvesting in cycling and pedestrian infrastructure, according to a report from the UN’s Environment Programme. Photograph: Nick Bradshaw.

Ireland is grossly underinvesting in cycling and pedestrian infrastructure which helps to save lives and reduce carbon emissions, according to a report from the UN’s Environment Programme.

The report argues that countries should invest at least 20 per cent of their transport budgets in walking and cycling facilities but finds that Ireland spends less than 1 per cent on these facilities.

The Department of Transport’s 2016 allocation for road improvements was €555 million. About €5.5 million went into improvements for cyclists and pedestrians but according to the UN’s recommendations the State should have invested some €111 million.

The lack of investment is causing unnecessary deaths, and is also contributing to climate change, the report, Global Outlook on Walking and Cycling, states.

It said 1.3 million lives were lost globally each year from traffic accidents and 49 per cent of these were pedestrians, cyclists and motorcyclists.

In Ireland, there were 166 road deaths with vulnerable road users including pedestrians, cyclists and motorcyclists accounting for 38 per cent of the total.

Many of these fatalities were linked to poor quality walking and cycling infrastructure, the UN report found.

“People are risking their lives every time they leave their homes,” said Erik Solheim, head of UN Environment.

“Designing transport systems around cars puts more vehicles on the road, increasing both greenhouse gas emissions and deadly air pollution. We must put people not cars first in transport systems.”

The report argues that countries should invest 20 per cent of their transport budgets in facilities that help protect vulnerable road users.

Motorised transport accounts for about a quarter of global carbon dioxide release and is growing by about 10 per cent a year, the UN said. By 2050 it could reach 33 per cent of emissions.

Improved cycling and walking facilities could help get people out of their cars and in turn reduce these emissions, the UN said.

Changes to existing road use and introducing countra-flows open to cyclists could bring major safety improvements in Ireland’s cities and towns, he said. This had been achieved in Belgium and it did not require substantial road alteration.

It found that Malawi, Kenya and South Africa were amongst the most dangerous countries in which to walk or cycle.